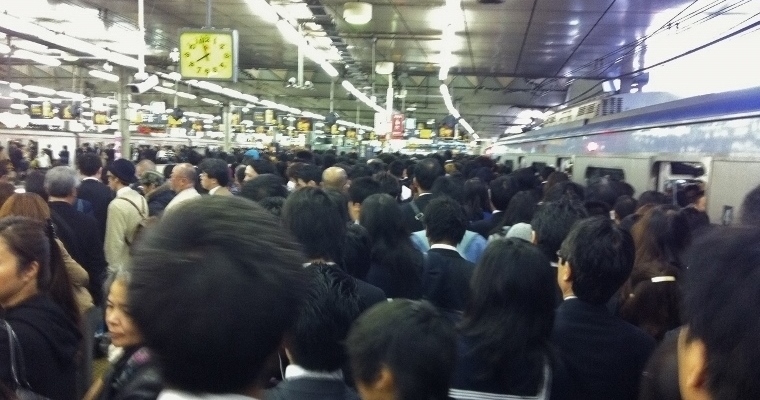 If you think London tube rush hour is bad, you’re wrong. Shanghai is much worse as this unlucky dude found out. He’s forced back into the train by a huge crowd at rush hour.

Okay, we all have some things in common even though we all preach our ‘individuality, dude’. And no, I’m not on about that huge photo collage of Mila Kunis that we’ve hung over our beds so we can give Mila a kiss and a chirpse before we slide into the Land of Nod. No, even though Mila is an absolute babe, I’m on about the other thing we’ve got in common. And that is: our amalgamated contempt for trains, and people, at rush hour. The steps leading to the underground that are patterned in chewing-gum corpses and smokers’ thick phlegm, the wincingly uncomfortable touch of a stranger’s hand/shoulder/foot as you queue, the sickening stench of commuters breath that invades your nose and mouth as you glance around for any potential terrorists, the greedy surge of bodies piling into the train carriages, the selfish suits who take up two seats with their briefcase/coat as they garble away to the escort/prostitute they’re shagging tonight and who they’ve fallen in love with a bit. You just wanna get home to silence after a long day, to your Mila and a Rustlers burger and a few smokes but all these idiots are making the day feel that much longer and disgusting and it’s making you feel sick.

Thankfully, I don’t work in London or live anywhere near the hole so the only times I have to put up with the cattle-market at tube time is when I venture to LDN for gigs or to visit good people and even then I try to avoid the tube and walk almost everywhere as the cab drivers stink and look as if they’re ready to mangle your limbs with a spatula. It’s good to walk in LDN, though, as it raises your awareness levels to a new high just in case you’re about to get stabbed or some fuckheads are planning to steal your wallet as you walk past them, admiring the fit bird’s arse in front of you.

I don’t live or work anywhere near China, either. I’ve always wanted to go to China, though. It’d be great to sit back on the Great Wall and light one up and be at one with the stones and grass and Chinese sun and clouds and beetles and flies and shit. The Chinese are known for being mental – but not as mental as their Japanese broz – and they’re also known for being touted as the next rulers of the world with all their technology and vast population and known for that really angry flag they adopted. One thing the Chinese aren’t really known for, though, is their absolutely ridiculously busy rush-hour trains and their horrible rudeness to anyone that gets in their way when they’re in a rush. I mean, like, when someone asks you what you think of China, your first answer wouldn’t be ‘they’ve got really busy rush-hour trains’ would it? Nah. It’d be something like, ‘they’re complete tekkerz at technology’, right?

Well, this might just change your perception. A Chinese bro is minding his own business as he’s catching the train home from work and he (tries) to get off at his stop but there’s a mass crowd of prize-plums agitatedly waiting for their train home and as the bro attempts to get off the train, the crowd don’t give a fuck and push past and into him and force him back into the train. Imagine if he really had to get off at that precise moment because he was meeting some girl for a drink and his potential shag was ruined because of all those idiots? Gutted. Here’s a photo of the bro trying to get out of the tangled mass. 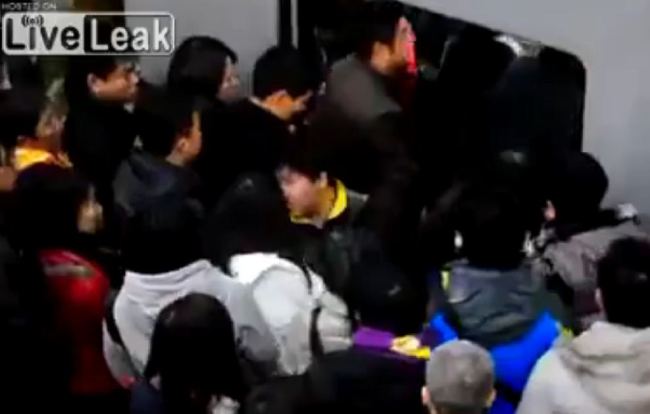 Check out the video if you think LDN rush-hour is bad. It’s got nothing on Shanghai (where this happened). It’s at times like this living in my tiny little shire ain’t that bad.