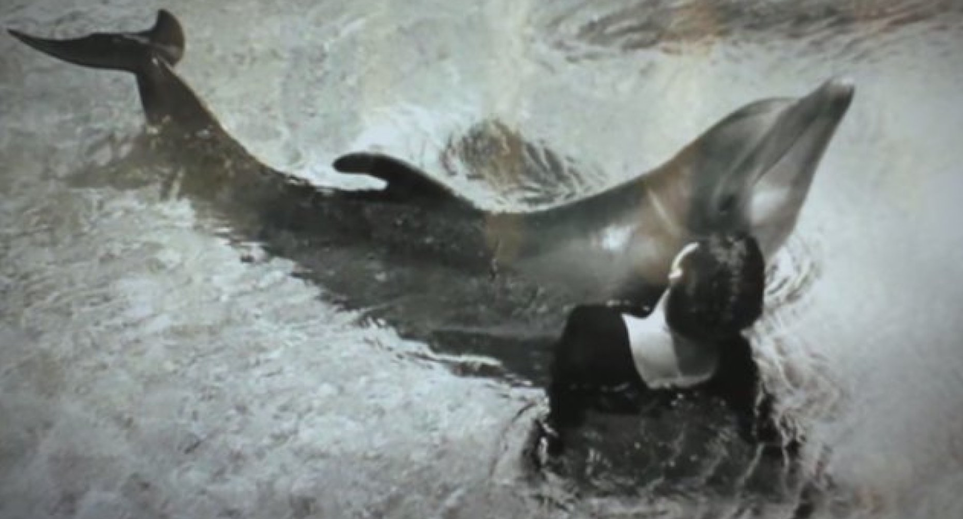 What actually happened during these experiments is even more screwed up than we previously thought.

Last week we featured the story about the woman who regularly jerked off her dolphin friend Peter, but what actually happened during these experiments is even more screwed up than we previously thought, as seen on BBC Four’s The Girl Who Talked To Dolphins which aired last night.

The experiments were mainly concerned with trying to get dolphins to communicate with humans.  The woman we featured last week, Margaret Lovatt, regularly tried to teach English to her dolphin lover Peter – in between jerking him off that is. It turns out that John Lilly, the scientist behind the experiments, wasn’t happy with the progress of the other dolphins in the experiment and decided to turn things up a little bit by giving them some LSD.

Quite why he thought this was a good idea is beyond me, and it’s also puzzling how he obtained the LSD and got his superiors to OK giving it to the dolphins. I guess if you’re  a scientist working on communicating with dolphins though you probably know where to get a bunch of acid from.

The LSD didn’t have that much effect on the dolphins surprisingly. For some reason, Lilly then proceeded to use a jackhammer near where the dolphins were swimming to illicit some kind of response from them (what!?!?) but that didn’t do anything either. Lilly was insistent that it kind of worked – saying that ‘they had ‘wonderful trips’ and displayed behavior – coming closer to him, taking odd floating positions – that they previously had not but everyone else probably just thinks that the whole episode makes him seem even crazier for taking part in these experiments anyway. The dolphins should probably just stick to getting high via pufferfish anyhow.

Sadly, things didn’t turn out well for Peter and Margaret. After funding for the project was cut in 1966, Peter was moved to a smaller facility in Miami and effectively committed suicide after being deprived of the love of his life. Dolphins have to think every time they take a breath – it’s not automatic – and so it wasn’t so hard for him to do this. Emo.

You can check out some clips from the show below: