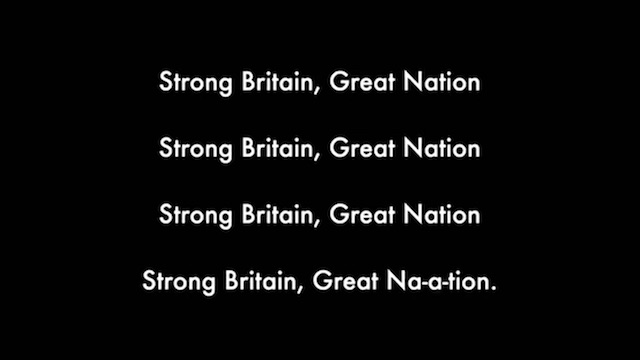 With all the trouble with the pandemic over the past eighteen months, you might have already forgotten that this Conservative government are desperate to turn the country into a hotbed of nationalism but this bizarre new song they’re asking children to sing on Friday for ‘One Britain One Nation’ Day is here to remind us.

‘One Britain One Nation’ is a campaign led by a former police officer named Kash Singh who is determined to galvanise the efforts of people from all backgrounds to rejoice in their pride of Great Britain. ‘One Britain One Nation’ Day is coming on June 25th and the campaign wants schools to help out and celebrate the holiday as it’s intended by singing the following song and sadly the Department Of Education also decided to get involved by tweeting about it, so it looks like the government is backing it as well.

This might be cool if the song didn’t sound like one of the worst school hymns you’ll ever hear and also kinda like something you might imagine they sing in North Korea or George Orwell’s ‘1984’. Take a listen below and see what you think:

We’re encouraging schools across the UK to celebrate One Britain One Nation Day on 25 June, when children can learn about our shared values of tolerance, kindness, pride and respect.#OBONDAY21 @1Britain1Nation

Inspiring a generation. Urging all schools to join us on 25th June for #OBONDAY2021 campaign supported by @educationgovuk to spread the message of #Pride #Unity #Love #Respect for all through a song composed by @StJohnsCE.
Please see link for full details https://t.co/7CtBQIPBos pic.twitter.com/7ngqoLmhiU

Eek. Surely anyone with a brain/knowledge of history can see that this is an absolutely idiotic idea? It’s kinda sad how this country descends further and further into a Chris Morris esque satire isn’t it?

It’s also important to note that the majority of Scottish schools will have broken up for the summer by this Friday, so the campaign clearly has no clue about what’s going on in all corners of this great nation that they’re so proudly trying to promote. Incredibly, even GB News aren’t backing this song which really does go some way to illustrating just how terrible an idea this was in the first place.

“I don’t want my children singing that.”

The Government are encouraging schools to celebrate ‘One Britain One Nation Day’ this Friday, but Kirsty Gallacher says the official song could seem like propaganda.

Oh well. I guess maybe Kash Singh and some other members of flag Twitter might be celebrating it come Friday? Enjoy yourselves boys, probably won’t becoming an annual event.

For more of the same, check out this North Korean student who says ‘wokeism’ is worse than anything she encountered in her home state. Jesus.