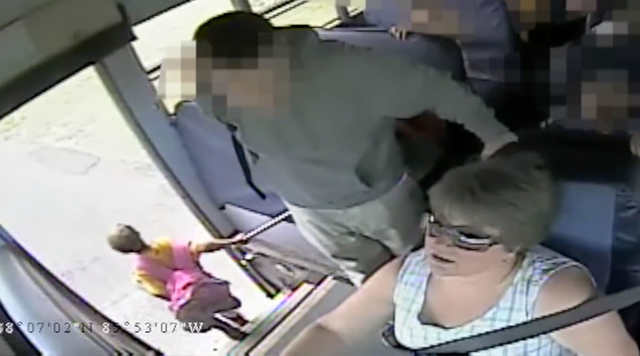 This is tough to watch.

Former Louisville, Kentucky school bus driver Melinda Sanders is facing a lawsuit after a video showed her dragging a 6-year-old girl who got stuck in the doors of the bus.

The poor girl tried to free herself but had mere seconds before a completely oblivious Sanders started to drive off.  She continued to drive for at least 1,000 feet before she noticed – and only because another car started beeping at her.

Man, it’s actually ruined my day watching that. I can’t imagine how the girl’s parents must have felt having to watch their child go through that. Absolutely heartbreaking and so frustrating that nobody noticed what was happening.

According to Local 12, the girl suffered nerve damage and PTSD, and has undergone multiple surgeries. A traumatic experience for sure, but thank God it didn’t turn out so much worse.

WPSD reports that Sanders (who has been fired) and the Jefferson County School District are facing a lawsuit over claims of negligence. The family’s lawyers have accused the driver and school of breaking 16 bus-driving rules the day the incident happened.

“The loading and unloading of children is the moment of truth. Let nothing distract you,” said one of the attorneys in court.

“What does that mean to you?” the attorney asked.

“It means a lot to me, and I wish, Mr. Paulus, that I had followed that, that day,” said Sanders. “I can’t take that day back.”

Well, we all wish she had. You have to feel for the bus driver as well who had a horrific lapse of concentration and will have to live with the fact she was responsible for this incident, but if you’re that little girl’s parents, you just can’t forgive that level of incompetence. Thoughts & prayers with the young girl and let’s hope she makes a full recovery.

To meet the hero bus driver who broke protocol to save two stray dogs from a thunderstorm, click HERE. Fair play.