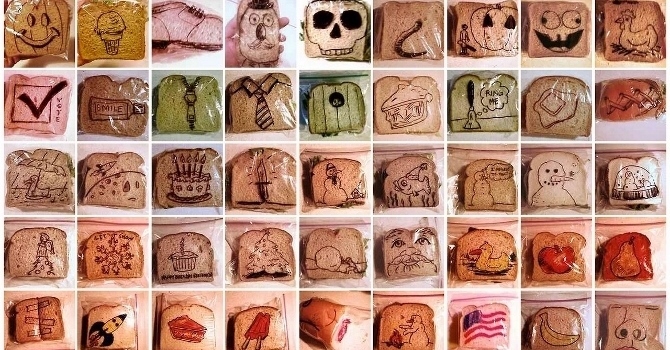 Boring lunches are a thing of the past with these rousing pieces of sandwich-bag art. You can now laugh while sat on your own in the canteen.

Boring lunches really take it out of you. Sat on your own in the canteen in work, doing a Steven Glansberg, your gaze perpetually frozen on your mediocre, stale, flat sandwiches that’re filled with the weakest and cheapest thin-sliced ham you could find. You’re wedged between the office clown and the wall and the heat wafting from his body meets and merges with your body heat and the windows are constantly locked so there’s no alternative but to sit there and sweat your bollocks off, the smell drifting from the clown’s armpits making your hangover tenfold worse and the hum and drills of laughter and pointless conversation means you can’t, and won’t, look at anything during your half-hour break apart from that sorry excuse of a sandwich that even a starving orphan would say no to.

â˜› Recognise Any Of These?: Office Workers From Hell

You know what it’s like. Waking up to a killer of a hangover with an hour before you’re due to begin the 9-5, you jump in the shower in the hope it’ll rouse you but you end up spending a good 20 minutes in there to sooth your alcohol-aching bones and then you have barely enough time to slip the eye-drops in (lessens the bloodshot veins) before you jump in the car and make your way in. But you’ve forgotten to make something for lunch and you’re skint so you can’t even buy anything in the canteen so you swing back out of the car, go back into your cave and make a quick sandwich that’s got enough penicillin on top to make you a very rich man.

And then it’s lunch break and you get the sandwich out and tell yourself you’re a stupid, alcoholic bastard for making – yet again – another absolutely awful one that lessens your appetite, rather than furthering it. The sandwich even looks as if it’s about to commit suicide, echoing your mental state. Your hangover gets worse as the day goes on and when you get in you have another drink to try to soften the damage and the next day you’re in the same state and it’s a massive cycle you can’t get out of blah blah blah.

â˜› This Will Sort A Hangover Out: Croque Madame

But even when you’ve got a rotter of a hangover, there are still some things out there that make you think the world isn’t such a shithole and force a painful smirk to erupt from your face. This is one of those things. Now, as I’ve mentioned, a boring lunch is a horrible thing. You dunno quite how to handle it and apparently, a boring lunch is the top instigator in office suicides. But the office suicide rate will decrease with every shirt n tie who sees this.

A guy by the name of David LaFerriere has been decorating his kids’ sandwich bags for the past five years, with his own take on art. I think this is pretty cool as when I was younger and prettier, I always used to have my sandwiches in some shitty cling film or foil or a sandwich box which used to stink of bananas and all the kids used to laugh at me and poke my face with twigs because of it. LaFerriere is a graphic designer and illustrator by trade and it seems he’s pretty legit at it all and isn’t one of those guys who say they’re an artist but they can’t even draw a wotsit. He’s actually decent at what he does. His kids are now 15 and 14 but that hasn’t stopped their dad from drawing on their sandwich bags. Perhaps it’s a bit like heroin.

LaFerriere says: ‘It was just a way to have fun with the kids and also start my creative juices before work. I had already been making their lunches, and I experimented with a few things.

‘They love it, and nothing makes me happier than hearing their reaction at the end of the day.’

His work has been featured on the official Sharpie blog (I didn’t know there was one, either) but he started uploading the pictures of his artwork to Flickr where it started to get noticed. I wouldn’t mind opening up my bag to find my sandwiches looking like this, mind. Would lighten up my blackened hangover.

Check some of his stuff out below and on the next page and you can find more of it here. 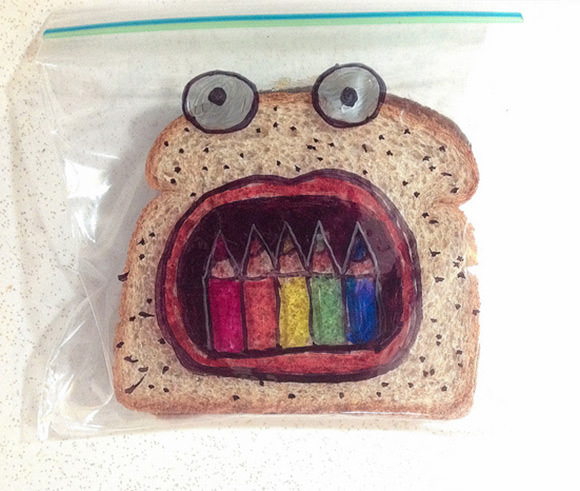