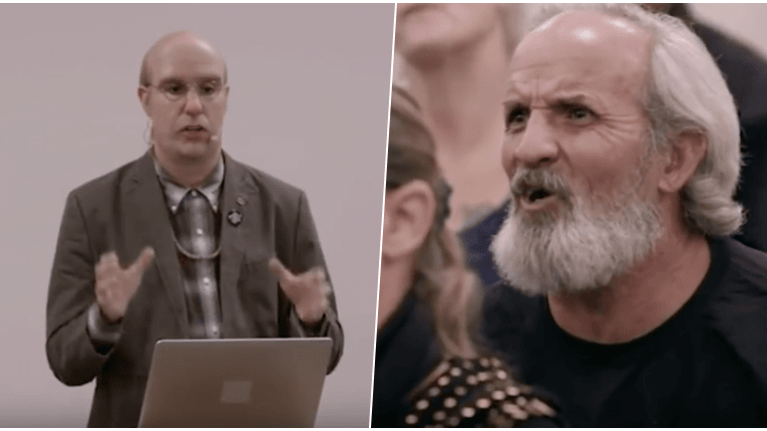 How do you think this goes down?

Sacha Baron Cohen is the king of winding people up and trolling them and then making them look even stupider by editing the video effectively and once again he’s doing this to great effect in his new show ‘Who Is America?’

I haven’t actually bothered to watch an episode of it yet and that’s because the best parts are largely released on the internet and you can just watch those when you’re bored at work, which is exactly what you’re going to do now. In the clip below, Cohen arrives in a city called Kingman, Arizona to tell the residents that a major new investment is coming to the town that’s going to create a lot of jobs. This obviously creates a lot of excitement, but this quickly turns to anger when they find out that the investment is going to be a giant mosque.

You can imagine how this goes down and it doesn’t disappoint:

Obviously – like everyone else involved in this series – the town of Kingman have hustled to issue an apology for their behaviour, claiming they were grossly duped by Cohen. In fairness that is true, but at the same time you can’t really claim that this isn’t racist abhorrent behaviour because it most certainly is.

In the interests of fairness though, here it is:

Every city has resident voices that challenge respect and dignity for others. They are wrong and unfortunate. That was no exception on Sunday’s Who Is America? show on Showtime in which an actor baited purported residents to vociferously oppose a fictitious, supersized mosque in our city.

Another in the audience also stated negative feelings towards African-Americans. No matter the instigation or that numerous ‘focus group’ participants don’t even live in Kingman, the show’s characterisation in the words of one member of our Kingman City Council ‘broke her heart.

Why? Because our community has made great strides to erase previous perceptions. We do have a mosque. We do have a robust Latino community. We do welcome tourists from all over the world, especially more and more from Asia fascinated by our Route 66 history. We do have African-Americans applying for leadership positions with the city. This is the Kingman of today, not of yesterday.

Shrugging this off is not going to be us. We’re going to use this opportunity to keep moving our community forward with the help of many community stakeholders including the Kingman Interfaith Council.

I mean that all sounds very well and good and if the show has caused the people of Kingman to change their outlook on life then it can only really be regarded as a success, can’t it? Real satire is supposed to help change things, and it looks like Cohen is actually doing this despite all the criticism he’s getting. Fair play.

For more of the same, see another great segment from the show here. Hilarious.