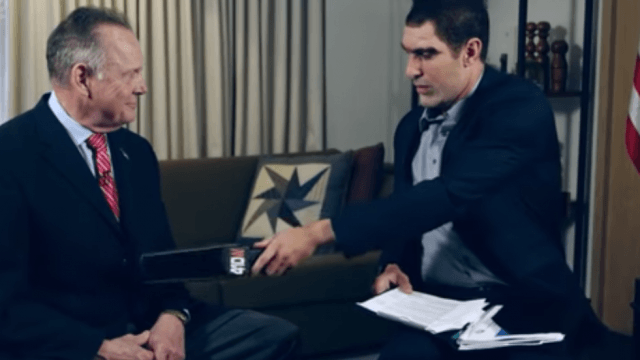 It just gets better and better.

Sacha Baron Cohen is smashing it once again with his new series ‘Who Is America?’ and every clip he seems to release before the episodes are absolutely golden.

In the latest one, we’re seeing Cohen dress up as an ‘Israeli Technology Expert’ who is using a fake device that can supposedly detect a rapist or paedophile upon immediate contact. Of course, he decides to use this to interview US politician Roy Moore, who has been accused of inappropriate sexual behaviour by a number of women – including one as young as 14 – during his career. You can guess how this is going to go down:

Well yeah, you probably guessed that it was going to go down like that didn’t you, and it didn’t disappoint, did it? Perhaps not as excellent as some skits that we’ve seen in the past, but probably notable for Wood’s inability to deal with the implication and storming out of the interview. You know you’ve got a good one when they end up leaving straight away.

For more of the same, check out this clip of him telling a redneck American town that they’re about to get a new mosque. Again, you can probably predict how that goes down.