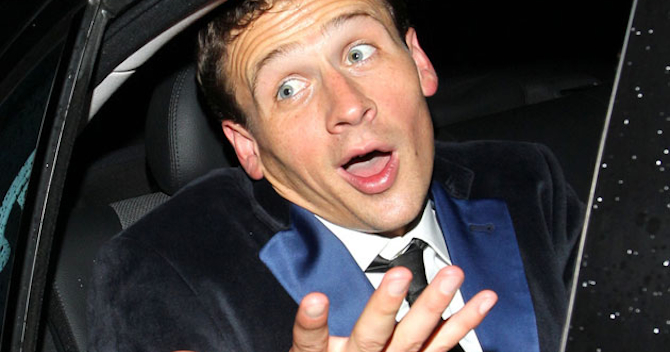 This might be one of the weirdest/dumbest/most airheaded interview in television history. Either that or everyone involved was just completely baked or something.

Props to Olly Johnston for sending this over. This is completely awesome and just about confirms every stereotype about American meathead jocks I’ve ever heard. You might remember Ryan Lochte from the Olympics as he did pretty well in the swimming pool (although Michael Phelps was better obv) and loads of girls on my Facebook timeline kept posting about how cute he was and how he had great eyes and even better abs. He also had a really annoying catchphrase (#Jeah) which didn’t really mean anything and didn’t even really catch on anywhere but people definitely gave it a try for a bit, despite their ignorance of its true meaning.

I was hoping I wouldn’t hear any more from Ryan Lochte until Rio 2016 so I might have a chance with any of the girls I know but unfortunately this wasn’t to be as somebody somewhere thought it would be a good idea to base a reality show around him. I guess it’s about as good an idea as basing a reality show around any one of the morons on TV right now that have reality shows. It’s called ‘What Would Ryan Lochte Do?’ and it premiered last night. I haven’t seen it yet but it sounds like a real laugh riot from the synopsis I read. Not.

You’ll see what I mean when you check out this interview from him with two newsreaders on the show Good Day Philly which happened last Friday to promote the show. The two newsreaders – Mike Jerrick  and Sheinelle Jones – are interviewing Ryan Lochte about the show and some of the answers he gives have got to be some of the dumbest things I have ever heard. It’s a combination of dumb soundbytes that don’t mean anything – kinda like the next week on Mad Men sequences – and dumbass one sentence responses that are pretty much the blandest description of anything that has ever been recorded and completely shut down the line of questioning and of course what every broadcaster looks for in an interview: complete and utter silence. Yeah, real great answers there Ryan Lochte.

The two newsreaders can’t quite believe it and somehow manage to hold it together during the segment but immediately following it they both burst into hysterics and laugh about Ryan Lochte and how stupid he is for about two minutes, and it’s probably one of the most bizarre news segments I have ever seen. I don’t watch the news very often though so maybe this is par for the course these days if they’re interviewing reality TV starts all the time. I can only guess.

But yeah, some of Ryan’s responses are really out there and it’s really awesome the way he rolls it out in this perfect Southern drawl that just makes him sound even more vacant than he already is. Either that or he’s really baked, and given that he seems to party all the time and is probably good friends with Michael Phelps this isn’t exactly out of the realms of possibility. For an example of some of his dumbass responses, look no further:

Mike: ‘How do you manage to party all night and then train all day?’

Ryan: ‘My philosophy is if you’re a man at night, you gotta be a man in the morning’

Sheinelle: ‘How has the adjustment to reality TV been?’

Ryan: ‘The first couple days, it was a little weird. I mean, I was brushing my teeth and the camera was there. I was like, ‘What are you guys doing?'” So the cameras were allowed in the bathroom? “I mean I guess there’s like a (pause) mirror with a sink, and you have the bathroom.’ (How is this even an answer?!?!)

The best part though was when the anchors asked Ryan what a girl had to do to impress him and he just sat there and didn’t say anything for five seconds with this vacant look on his face. It ruled. Still, even though Ryan Lochte is really dumb and can’t answer questions like a normal person he’s still going to earn more money than me, get more medals than me and bang more babes than me. I’m not sure if he’s going to have a successful reality TV career though based on this interview but then again neither am I. I guess we’ll have to wait and see on both of those counts, but Mike probably summed it up best when after the interview he asked ‘How the hell are they gonna get a whole season out of that?’

The Weirdest TV Interview Ever