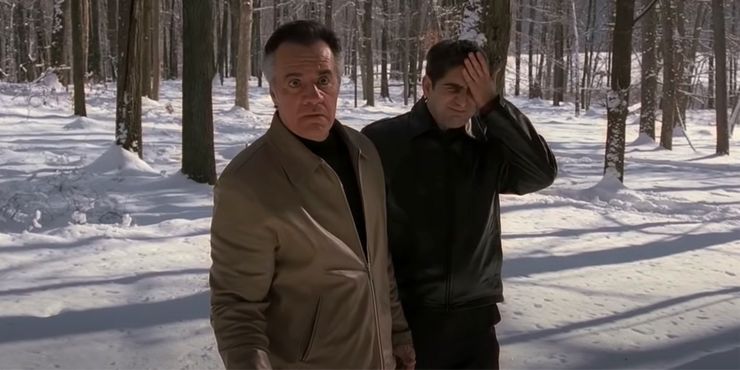 Finally, the truth about the Russian.

‘What happened to the Russian in Pine Barrens?’ is one of the most frequently asked questions about The Sopranos. People have theorised for years that maybe he was found by some Boy Scouts or maybe he was just hiding up in a tree the whole time until Paulie & Christopher left. Others say he just died.

Well the man who wrote the episode, Terry Winter, has now revealed on ‘Talking Sopranos’ what would have happened with the Russian if plans had gone ahead:

“I pitched David [Chase] on the idea of Christopher going to see Slava two years later where he sees the Russian (Valery) sweeping the floor and they meet eyes and Christopher says ‘Holy Shit, he knows me’ to himself and then Valery turns around and half the back of his head is gone, clearly brain damaged, a vegetable who keeps looking at Christopher like he knows who he is, but he just can’t communicate it. David was on board, but then I made the fatal error in saying that the audience is going to love it where David replied that that was the worst reason in the world to do it so it never happened”

Oh man that would have been awesome. What’s David Chase’s problem? Gives us one of the best episodes of TV ever with so many hilarious quotes and then just ends the storyline because the idea of pandering to Sopranos fans makes him sick. Well I guess we can’t really be too mad at him since he’s the genius who has us talking about it 15 years later.

Another question that needs answering is what the hell happened to Paulie’s car in that episode? Did the Russian steal it? Did it get towed? That might actually bother me more than what happened to the Russian.

For a look at James Gandolfini’s son, who will be playing his dad in the upcoming Sopranos sequel, click HERE.