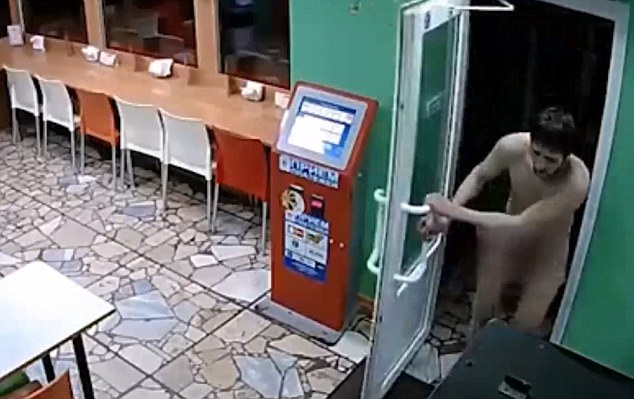 You can’t trip balls much harder than this.

Not much info available on this other than the guy is tripping his nuts off in Saratov, Russia and decides to hit up a small cafÃ©, where he yells at the terrified waitress to shoot him in the head and kill him.

As you’ll see she tries to close the back room door on him but his superhuman crackhead strength is too much to contend with.

Whenever I watch videos like this one it always makes me feel so grateful that I didn’t go all-out insane when doing shrooms and the like in my younger days. I mean yeah this guy might be on something way worse than shrooms or acid but just the idea I could have wound up running around the streets naked talking utter bollocks fills me with retrospective terror. No one wants to be the guy sitting naked on some cafÃ© counter, picking his arsehole (or whatever he’s doing) while some poor lady freaks out in the back room.

But I might rather be that guy, than the guy who started eating the postman’s mail before being involved in the most bizarre arrest video of all time.