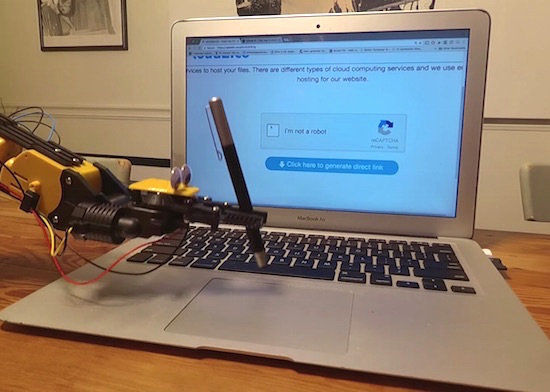 I’m not sure about you, but whenever I have to solve a captcha to prove that I’m not a robot, all it does is annoy me rather than make me feel safe and secure in the fact that robots aren’t going to be able to access my personal information.

Now though, even the minuscule amount of people who did feel comforted by this test can’t anymore as the video below proves that robots are able to now bypass them. The future is now folks:

Gangster. Sure, there’s no actual evidence that the robot is thinking for itself and it probably is remote controlled, but even so you’ve got to think that it’s probably only going to be a matter of time until they figure out how to do these things on their own. To be honest they probably don’t even really need to use the touchpad – they’ll just be able to hack into the computer and simulate it in the future. Scary.