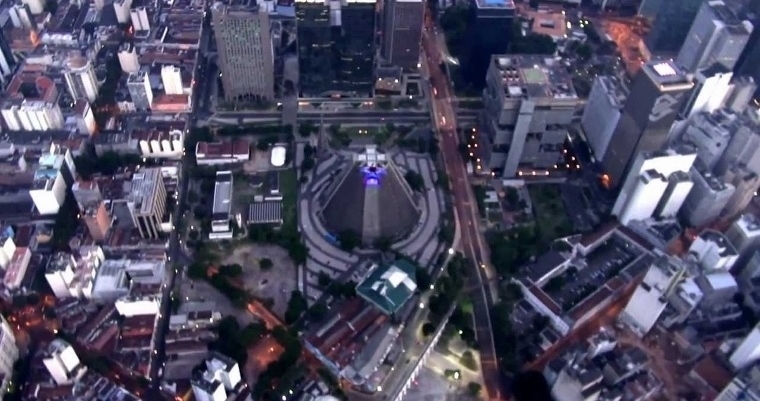 Wingsuit flying has just been taken to a whole new level. Watch this crazy footage of two dudes flying into Rio de Janeiro, scaling the city’s majestic views at the same time.

If you squint your vein-splattered, alcohol-ridden eyeballs and look really closely at the picture above, you’ll be able to make out a guy flying in the air wearing all-blue. He looks a bit like he’s a part of the building he’s flying over but he’s no gargoyle. He’s just a dude. A dude flying in the air, wearing a wingsuit, over the hot and sweaty streets of Rio de Janeiro. I’m not having a game of Where’s Wally? with you because I did that when I was about 6; I’m just letting you know about the picture above because the whole thing is worth a watch.

The dude in the picture above is called Jokke Sommer, a Norwegian BASE jumper, who’s being filmed by one of his boyz, Ludovic Woerth, who’s a professional parachutist and videographer. The pair of them have just jumped from the skies and are urban wingsuit flying into – not over – Rio de Janeiro. Why do I need to know this, I bet you’re asking? Well, it’s pretty simple really. There aren’t many rules at Sick Chirpse but one of the rules we live by is that the stuff we write about and let you lot procrastinate over has to be really cool and worthwhile, otherwise we’ll end up like a shit site, and this is pretty high up there on the old cool-o-meter.

I don’t really know why the dudes decided to urban wingsuit fly into Rio, but that doesn’t matter as not everything needs a reason. Some things are done and created for no other reason than: why the f’ not? I’ve never been wingsuit flying but I’ve watched a load of videos about it and it looks as if you need massive balls to do it as it looks really legit and awesome but it’s also more dangerous than going to Thailand with a full wallet and divorce papers. You really can’t be a pussy if you’re thinking of wingsuit flying because if you freeze when you’re flying through the air (like actual planes freeze when flying over the Bermuda Triangle) in a wingsuit, there’s not much you can do and you won’t be able to phone your mam to tell her she’s the best you’ve ever had. You just have to grit your teeth, clench your ass and get on with the job. Like a gay pornstar.

â˜› You Like Smut?: Coco Brown – The First Smut Star In Space

I’ve never been to Rio de Janeiro either but the place is definitely on my list that’s kept in my drawer alongside unused, years-old condoms. The place is full of babes and has awesome chill-out spots and beaches and views and is pretty much sunny all the time, and there’s bound to be awesome beach-footballers there, too, so what’s not to like about it? Nothing. Everyone’s heard of the slums there but I’m used to that as where I live is a minging cesspit too, so the slums won’t be much of a barrier for me.

Anyway, back to the wingsuit dudes. When I first watched the video I couldn’t tell if it was real or not because it looks just too mental and super-imposed but after some research, the video is 100% real and I felt like an idiot for doubting such an awesome feat. So: sorry, Jokke and sorry, Ludovic. The dudes had to do their jump at 5.45 am as they didn’t have permission to fly into the city, and the first flights arrive at 6.05 am so they’re complete anarchist-punks as well as massive-balled dudes. Check out the video, it’s totally sick and will really make you want to urban wingsuit fly.

â˜› These Guys Like Wingsuits: Wingsuit Race at 140mph