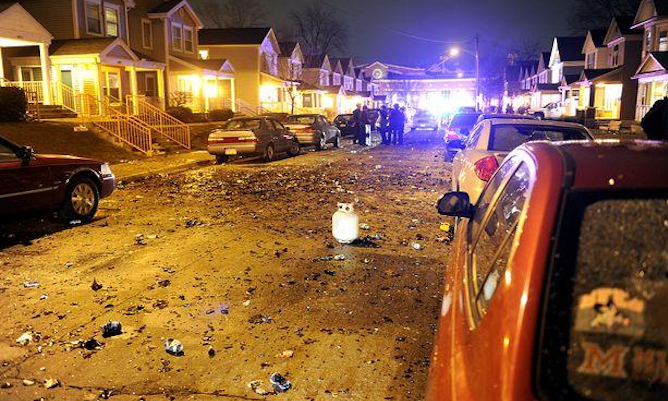 St Patrick’s Day is always an occasion to get drunk and rowdy, but it looks like they took things a bit too far over in Dayton, Ohio, as one party ended up getting the riot police called in to shut it down at 5am, Project X style.

St Patrick’s Day is massive. I mean over here everyone pretends that they’re Irish and gets really loaded, or hangs out with that one Irish friend they kinda know just as an excuse so they can get really loaded. I guess it’s a cool excuse to drink yourself into oblivion , but to be honest there’s always an excuse anyway (it’s some dude I went to high school’s birthday, I lost my job, XXX’s girlfriend is out of town and he never parties anymore, the new Resident Evil game is out, there’s a new Blink 182 album etc etc) so I’m not sure how it’s developed into such a massive event. It’s cool though don’t get me wrong – I love it.

However big it is over here though, it’s literally nothing compared to how big it is over in the States and Canada. It’s literally huge and non-Irish people plan their parties for it about two months in advance. Shit is literally crazy.  When I lived in Toronto back in 2007, it was completely nuts, I think a bunch of us did a Case Race (first one to drink a case of 24 bottles of lager wins) and then hit up the club where we drank even more. I don’t really know how any of us made it to the club but pretty much everyone in the city was as incapacitated as us so it was fine. It ruled.

â˜›  Kinda Like This: Blackout Drunk Last Night? You’ve Got Nothing On These Guys

It seems like things haven’t got any less crazy over there either, at least judging by what went down in Dayton, Ohio yesterday. I have never heard of Dayton, Ohio and it doesn’t seem like I really have any reason to either because it’s in the ass end of nowhere but it seems like they know how to party over there for sure as their St Patrick’s Day looked like it turned into a real life version of Project X.

If you missed Project X last year then you missed out – it completely ruled. It was basically a really stupid move about some guys who had a house party that got completely out of hand because everyone in the world heard about it and showed up, all thanks to social media. Spoiler alert: it ends with the riot squad getting called in because the party got so out of hand.

Well, that’s exactly what happened in Dayton, Ohio last night – the St Patrick’s Day party was so out of control that they had to bring in the riot squad to shut it down. Over 1000 people were involved in the party, and cops from 10 jurisdictions showed up to quell a party that left broken beer bottles on the streets (a wah!) and damaged 11 cars in the neighbourhood.

Apparently it all kicked off when some cops showed up to investigate a fire alarm in the student area where the party was going down. The crowd of people – who had likely been drinking all day – started jumping on cars and taunting the cops and throwing beer bottles at them. It was then that they decided to call the riot police in. I guess that’s fair enough but if you look at some of the pictures/tweets below it does seem like a slight overreaction. It’s a cool story though.

Funnily enough, the Universty of Dayton – sorry this is where this all went down, I should have mentioned that earlier in the article – has had a long history of trouble with St Patrick’s Day and after a massive fire destroyed a couple of cars in 1992, they actually changed their Spring Break dates so that St Patrick’s Day wouldn’t be included. Unfortunately – for them at least – it looks like someone forgot what a mess St Patrick’s Day can be. Maybe they’ll be enforcing those Spring Break regulations after this PR disaster.

Check out some of the best pictures/tweets from the incident below, as well as some pictures of the damage in the aftermath. There’s a bunch of videos over at the Dayton Daily’s website too but I can’t figure out how to embed them on here. 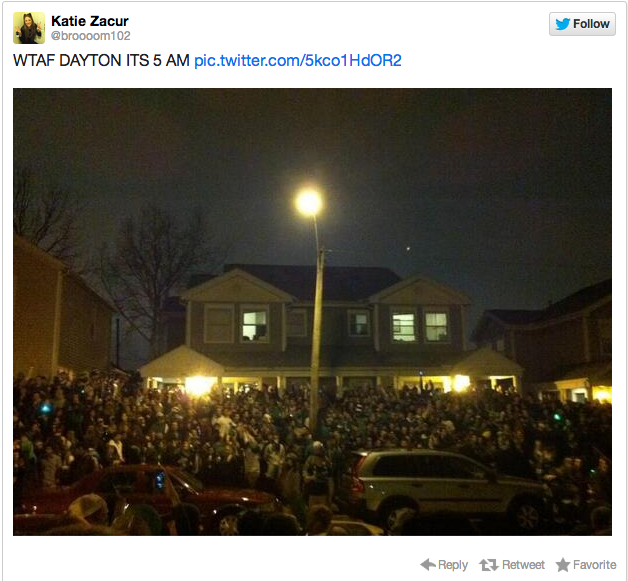