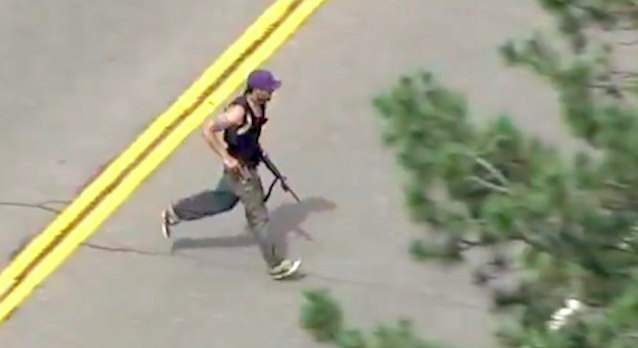 Guy runs around the forest with a massive assault rifle then steals a car and tries to carjack a bunch of people on the freeway. Meth, apparently.

Here’s a video of some dude who’s completely lost the plot in the mountains of Jefferson County Alabama and thinks he’s actually in GTA for some reason. Although he isn’t very good at GTA because he can’t actually successfully carjack anyone and ends up getting taken down by the cops pretty easily.

People are saying he was on meth – which is perfectly plausible – but it seems a little insane that he would just walk around with a gun in the mountain trying to carjack people like this and generally being completely weird. I guess meth will do that to you.

A lot of the video is just the dude walking around with a gun – which is kind of cool because you want to know where he’s going and what he’s up to – but it gets good around 6:30 where he breaks into someone’s house and steals their car and drives it through the garage door, then crashes it into a ditch under no pressure from the cops. Told you he was shit at GTA, and his gameplay only gets worse from then. Too bad he wasn’t as slick as this guy from Denver.

Also there’s no soundtrack and it works way better with music. We recommend listening to Dr Dre’s Ring Ding Dong, which we’ve kindly included below for you. If anyone is concerned nobody was hurt by this dude’s rampage, but he was firing random bullets all the way through it, again like a really bad GTA player.