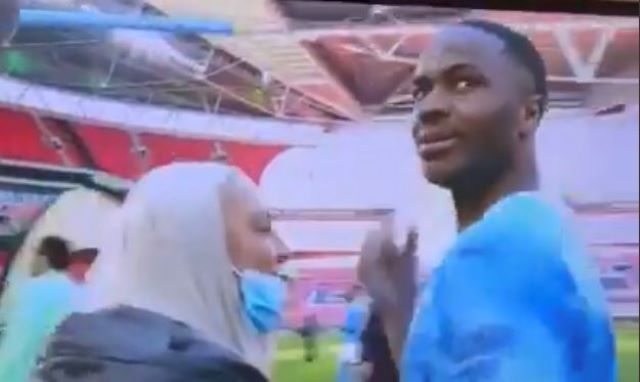 As expected, Man City battered Spurs on Sunday to clinch the EFL Cup, but what many seem to be talking about instead is this interaction Raheem Sterling had with a Man City physio following the game.

It looks like she wants to congratulate Sterling on the win, but maybe gets a little too handsy for his liking…

Oh shit, that’s just a bit suspect. I mean I suppose he could tell his wife who was probably watching that he didn’t want the physio touching him due to Covid rules, but then again… she is the physio. And he hugged and high fived pretty much everyone else on the pitch so that may not be the best play after all.

Or maybe Raheem is completely innocent and just didn’t want it to appear like he’s shagging the physio, and that’s why he batted her away? I don’t know, just trying to make some kind of defence for the guy here. Last thing he needs ahead of a Champions League semi-final against PSG is his wife kicking his ass all over their Manchester mansion. Though I wouldn’t really blame her after watching that clip. Naughty Raheem!