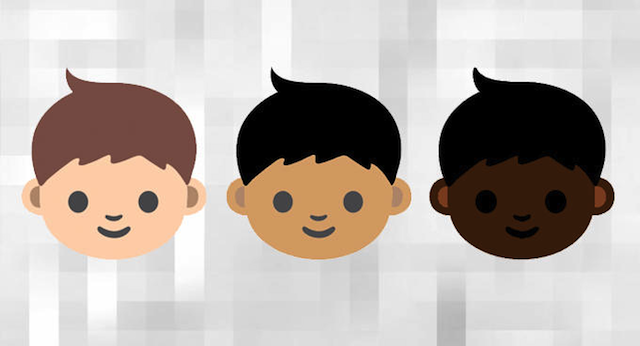 The guys who control emoji are called the Unicode consortium and they’ve recently released a report that’s proposed an update to the current roster that will ‘finally’ address the issue of racial diversity.

The guys who control emoji are called the Unicode consortium and they’ve recently released a report that’s proposed an update to the current roster that will ‘finally’ address the issue of racial diversity. I’m not sure how many people are actually that concerned about this – I’ve never really heard anyone mention it before – but the fact that it’s going to be implemented isn’t exactly a bad thing. I mean it’s 2015 isn’t it bro?

Here’s what the report had to say on the matter:

People all over the world want to have emoji that reflect more human diversity, especially for skin tone.

The Unicode emoji characters for people and body parts are meant to be generic, yet following the precedents set by the original Japanese carrier images, they are often shown with a light skin tone instead of a more generic (inhuman) appearance, such as a yellow/orange color or a silhouette.

The proposed Unicode Version 8.0 will be adding 5 symbol modifier characters that provide for a range of skin tones for human emoji and that these characters are based on the six tones of the Fitzpatrick scale, a recognized standard for dermatology.

Sounds swell. It’s also nice that they managed to absolve themselves of any blame by pointing the finger at the Japanese huh?

In any case the emojis are set to debut in mid 2015. It’s being thought that you’ll probably press and hold a button on your phone to make the skin tone darker, which is easier than using a slider I’m sure you’ll agree. Hopefully this will make emojis in real life less terrifying too, although I really do doubt that.