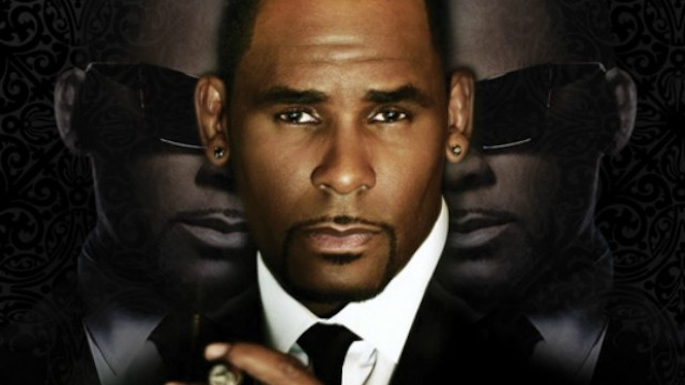 America is the land of the free and home of the brave, but if petitioners get there way then it could be the land of sipping coke and rum and being like so what I’m drunk.

America is the land of the free. Or at least that’s what they market themselves as and what it says in their national anthem. However, some people over in the US don’t think that their current national anthem The Star Spangled Banner is representative of the current mindset of the country and have petitioned the White House to change it to R. Kelly’s 2003 megahit Ignition (Remix). This sounds like a pretty cool idea to me.

I mean, that song came out almost ten years ago and everyone still loves it now, so everyone will probably still love it in a hundred years time or whatever. It’s just got that timeless feel to it that a national anthem needs and which The Star Spangled Banner just doesn’t seem to have anymore, at least according to this guys who has started this petition. His name is S.R. and he’s from Wilmington North Carolina, which in fairness is one of the coolest places I’ve ever been and also where they filmed Dawson’s Creek.

You might think that the idea of starting a petition is particularly stupid but it’s a whole lot different in the States as opposed to over here where it doesn’t seem like starting a petition actually achieves anything. Although having said that my flatmate Shoey did get a letter from his MP apologising for not sorting out a petition (which Shoey had forgotten he even signed) more quickly than he had done a couple of days ago.

But yeah, like I said, it’s way different over in America. The White House has a dedicated site where you can submit petitions directly to the government about issues you feel that are really important and need to be sorted out – you know stuff like raising suicide awareness or ending political corruption – and people can log in and sign up to it there and then. Obviously there are a bunch of jokers who abuse the system though, which can be seen by the recent petition submitted to the White House for it to build its own version of the Death Star and now in this one about the national anthem.

â˜› More Petitions: Official Petition To Have Piers Morgan Deported From The USA

For a petition to be considered by the White House, it has to have received over 100,000 signatures in a 30 day period. Currently, this R.Kelly petition has about 4500 signatures but it’s only been up for a day so there’s a good chance it might reach that target. Head on over there if you’re American and help this worthy cause.

If you need any more convincing here’s the text of the petition and the great song itself:

‘We, the undersigned, would like the Obama administration to recognize the need for a new national anthem, one that even a decade after its creation, is still hot and fresh out the kitchen. America has changed since Francis Scott Key penned our current anthem in 1814. Since then, we have realized that after the show, it’s the afterparty, and that after the party, it’s the hotel lobby, and—perhaps most importantly—that ’round about four, you’ve got to clear the lobby, at which point it’s strongly recommended that you take it to the room and freak somebody. President Obama: we ask you to recognize the evolution of this beautiful country and give us an anthem that better suits the glorious nation we have become.’

â˜› Watch This Next: Dude Absolutely Kills It With Cover Of R.Kelly’s Ignition 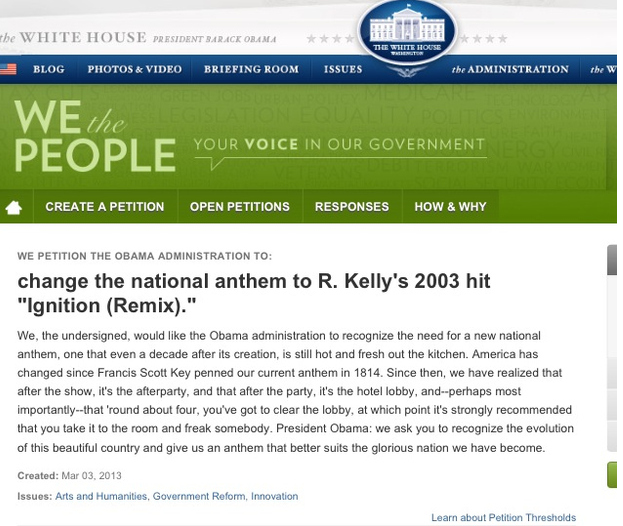