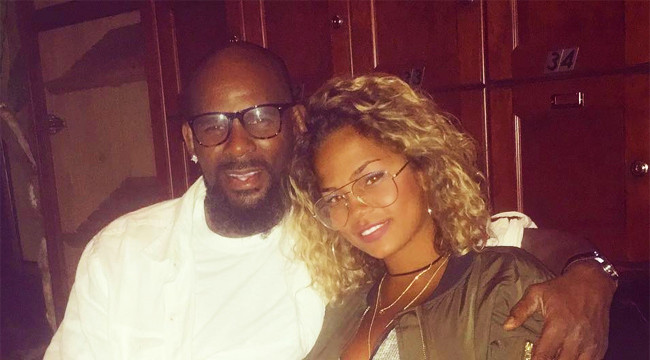 This guy doesn’t do himself any favours.

R. Kelly has a chequered history of weird sexual practices with very young and possibly underage girls, and he doesn’t really do himself any favours as he’s constantly hounding girls who are almost 30 years younger than him with absolutely no shame at all.

The latest is 19-year-old model named Halle Calhoun. Here’s what Dallas Black had to say about their ‘relationship’:

So, R. Kelly is reportedly wining and dining a 19-year-old girl named Halle.

And word on the street is that Kelly has fallen HEAD OVER HEELS for the girl, and is trying to put a ring on it.

From her pictures, it is clear that R. Kelly has good taste. She first met R. Kelly while attending his concert in North Carolina.

She was there with her mother…

Lol. I mean it’s funny that she was there with her mother, but the whole situation is just creepy, isn’t it? What kind of 49-year-old man goes after a 19-year-old girl? Shouldn’t someone just tell R. Kelly that it’s wrong and gross, especially after the fact that he’s been doing it for years.

Unfortunately judging by her Instagram account (pictured above), it seems like Halle is into it. But I suppose you can’t really blame her when a world famous singer with loads of money is all over her, splashing her with gifts and shit all the time. You would be dumb not to take advantage of it I suppose, but the whole situation just gives me the creeps. Yuck.

For more R. Kelly, here he is walking out of an interview after he got asked about peeing on underage girls.