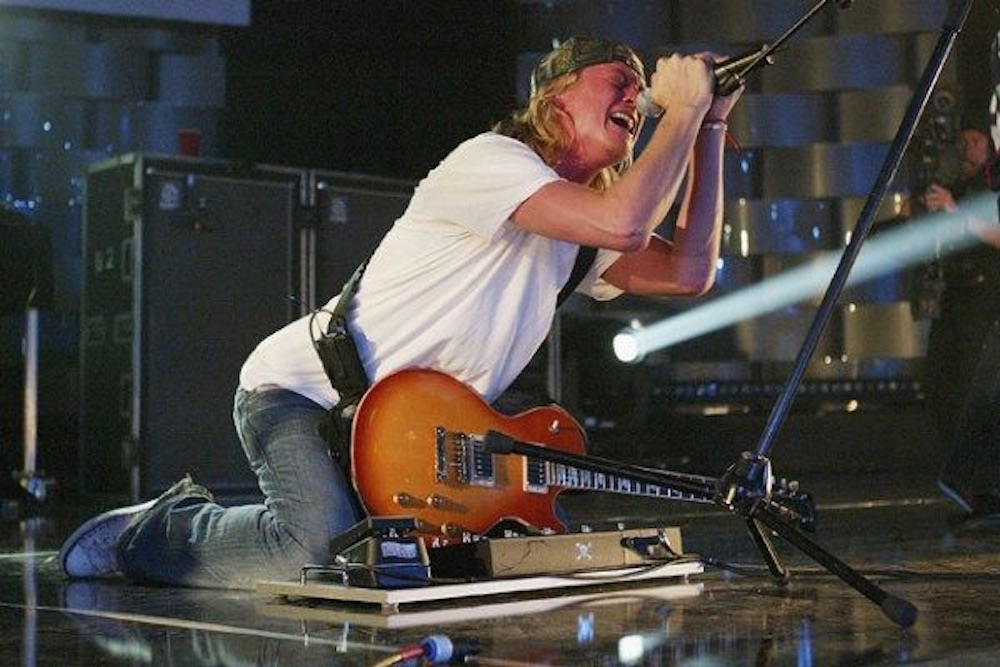 This is borderline insane.

I was pretty surprised to hear that Puddle Of Mudd was still a band. They had a couple of minor nu metal hits at the turn of the millennium with songs like Blurry, Control and She Hates Me, but I haven’t heard anything about them since that period.

It seems like things aren’t going that well for them though, as singer Wes Scantlin had a massive meltdown at a show at the Adelphia Music Hall in Marietta, Ohio (where the heck? Kinda sums up their career right now) when he apparently saw the guy who had moved into his house or been responsible for repossessing it. Again, hardly a sign that Puddle Of Mudd’s career is too hot right now.

Anyway, Scantlin spots this guy near the front of the crowd (or a guy who looks like him, it’s never really confirmed) laughing at him, and goes on a three minute expletive laden rant at him about how he stole his house, which sounds borderline insane:

Wow. It’s kinda cool how he just stopped the show mid-set, went off on a rant and then walked off stage, but on the other hand you’ve also got to look at how desperately sad this is. I mean he was never a bonafide A league rockstar, but still I guess it shows how things can go if you take a gamble on the music industry and it doesn’t work out. Depressing.

Still, if it was the guy who stole his house in the crowd, then that is some of the most brutal trolling I’ve ever seen. Imagine stealing a guy’s house, then travelling to Marietta, Ohio (they can’t both live there surely?) to see his crappy band play and then standing at the front and laughing at how shitty his life is. Guy must really hate Wes Scantlin for some reason or just be a total dick I guess.

Oh I almost forgot. Scantlin is also wearing a Puddle Of Mudd t-shirt. Make of that what you will.

For more onstage meltdowns, check out Billie Joe Armstrong’s infamous onstage rant at Justin Bieber from a couple of years ago. Happens to the best of us.