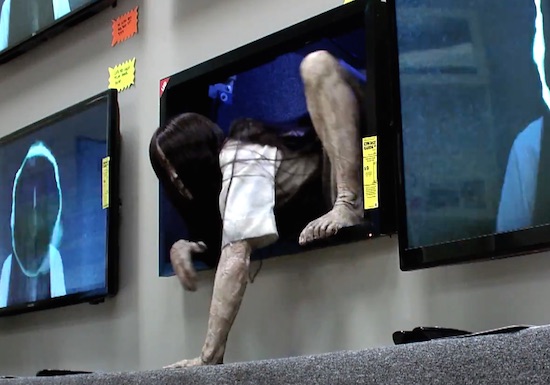 A step too far.

‘The Ring’ series of movies is absolutely terrifying because it taps into that completely irrational fear that the images on your TV could one day step out of the screen to kill you.

Of course, that’s never ever going to actually happen… until now. In order to promote the new movie in the franchise ‘Rings’, Paramount Pictures decided to play a little prank on people who were shopping for new televisions.

‘The Ring’ was blazing on all the screens in the store, only one of them wasn’t a real television and it allowed Samara to climb out of it, into the shop. Everybody absolutely freaked the fuck out:

I like the ones towards the end where the TV store guy gets all wild too – it really adds to the whole prank.

If this hasn’t got you excited for the ‘Rings’ movie, check out the official trailer for it right here. Looks scary as fuck.