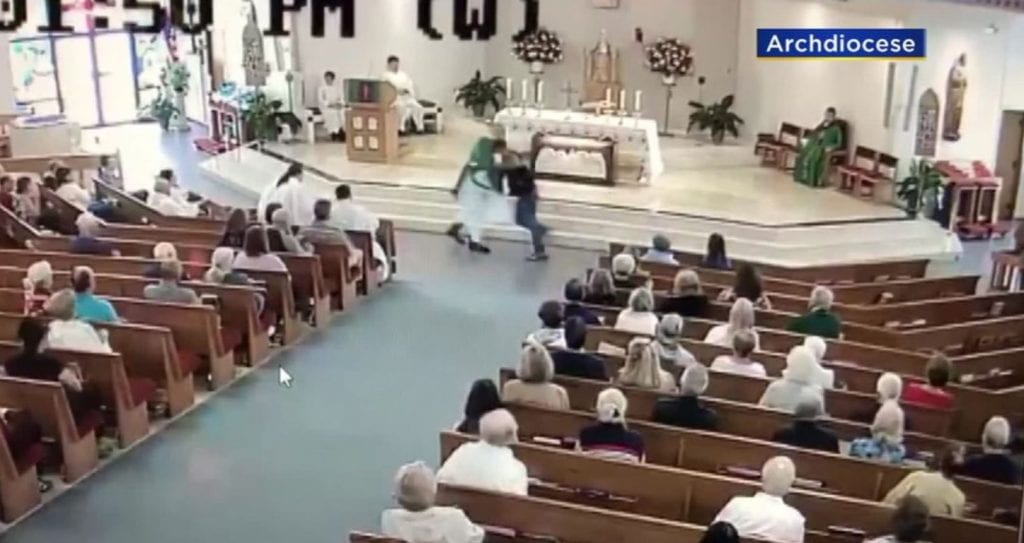 A priest who was conducting a service at St. Coleman Catholic Church in Pompano Beach, Florida, is a bit of a hero this week after he completely manhandled a man who tried to tackle him in front of the whole church.

The man was sitting in the front row and biding his time until the priest turned away from him, but that didn’t stop the priest from blocking the rugby tackle, spinning the guy around and putting him in on the floor:

A 28-year-old Florida man is accused of tackling a deacon during a Saturday evening service.

Security video shows parishioners jumping in to help. The deacon was not injured. https://t.co/X7BqgvSeK0 pic.twitter.com/e9WkxNOhmL

It’s even more impressive when you consider he’s in costume and probably pissed on wine. The only question that remains is why the guy was charging him in the first place? Probably touched him when he was a little boy or something. In which case this video is a tragic injustice and not feel-good footage of a badass priest taking down a lunatic in his church.

Fair play to everyone in the church, even the grannies, getting involved to help out too. Makes a difference from people whipping out their phones and yelling ‘Worldstar’ doesn’t it?