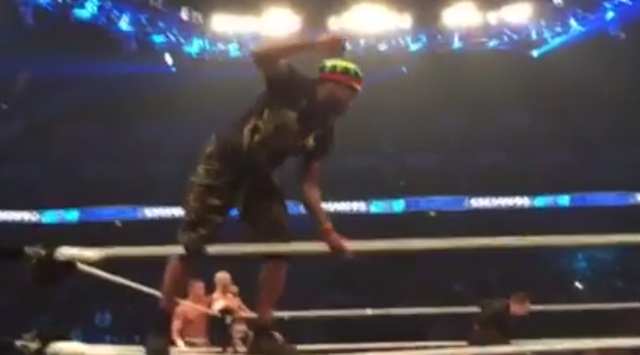 Living out every wrestling fan’s dream.

For anyone who’s ever watched wrestling, it’s probably been an absolute dream most of your life to actually set foot in the squared circle and try out some moves or even go one on one with The Great One. You just get the feeling it would feel a lot more genuine and awesome than rolling around with your mates in a field trying to powerslam them.

Professional pranksters Trollstation decided to live out these dreams by pranking a recent Smackdown even in England by dressing up as wrestlers and storming the ring. Daniel Bryan and John Cena were due to fight Tyson Kidd and Cesaro when a guy in a Lucha Libre mask ran into the ring. Presumably fans thought that was part of the storyline but it only got more confusing when another guy dressed up as a rasta jumped the ring and laid a pretty tasty Rock Bottom on another dude that actually gets a pretty big pop off the crowd and causes him to bounce on the ropes for a bit.

Predictably they’re carted off by security as the referees try to stop them. It’s a shame that Cena didn’t FU one of them though. Still, not as fun a time as when this guy did WWE finishers in public places.