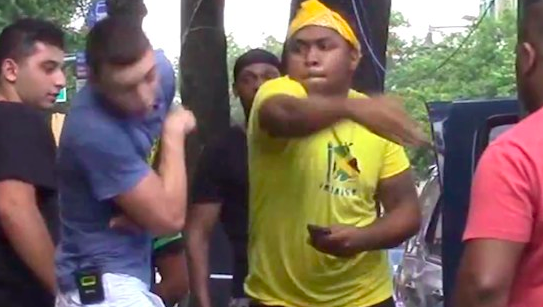 This is why you should never stop on a bro’s Air Jordans.

Hood pranks – where some pranksters go hang out in the hood and piss people off to get a reaction and film it – seem to be all the rage now, and although at their essence they’re kind of racist they are still kind of funny, like this one where this guy tries to rob phones in the hood and gets the crap kicked out of him.

This one is great, although I’m sure it could have been performed anywhere and didn’t have to be in the hood, although the hood probably does give them the maximum results that they’re looking for. The premise was simple – walk around New York City stepping on people’s Air Jordans until somebody kills you.

Although nobody managed to kill these two pranksters, they did get multiple beatdowns and you can’t really blame the guys giving the beatdowns either, because if someone came up to me and trod all over my £200 kicks I wouldn’t be best pleased either. Guys definitely deserve it, so it’s even better that they caught it on film so we can laugh at their stupidity.