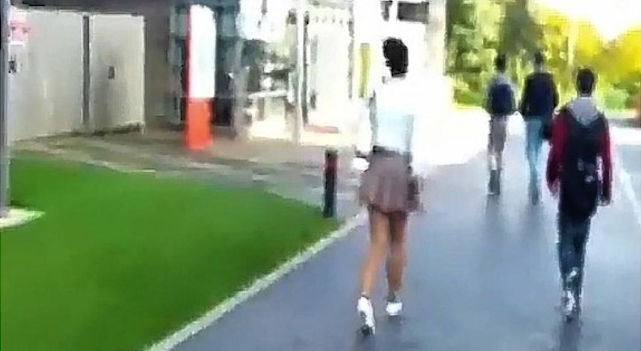 The University of Western England in Bristol was used for a very different higher education recently – if you know what I mean – and they’re not happy about it at all.

It’s 23 minutes long and features Johnny Rockard walking around the UWE campus, saying that he’s looking for a girl who wants to earn some money and have some fun. Great. He then runs into the character called Xzena who seems to fit the criteria and says she’s a third year psychology student. Sure. Pretty soon after she’s blowing him by the gates of the campus and then on the bus into Bristol, where she bangs him on some stairs leading to a flyover on Nelson Street. Wherever that is.

Apparently neither of the people in the video are actual students at the university and it was shot during the summer holidays, but nevertheless university officials are appalled that this kind of behaviour took place on campus. The vice chancellor of the university Steve West had this to say:

‘I am appalled that the university should be subject to such behaviour from someone with no connection to the university, resulting in a false and misleading representation of the university.We have worked with the Students’ Union, staff, our on-campus security, have involved the police to investigate and have taken legal action.’ Or in other words AWAH.

Johnny Rockard himself is being a bit of a badass about the whole situation, and generally being fully co-operative about it all, offering the address of his business and full access to anything the police have requested. He said that he had broken no laws in filming the video and that the woman in it had been paid a large sum for her performance: ‘It is a public space.If I was in their buildings they could take issue but it is public land, so I have not breached any law’. Sounds like a smart cookie.