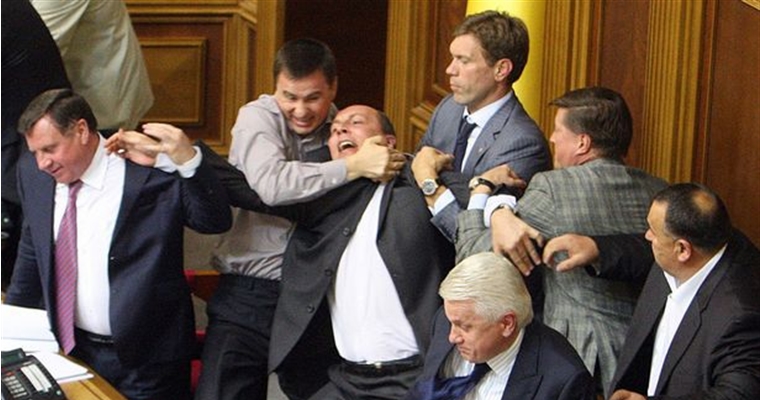 This week a couple of Georgian politicians had a scrap on national TV. To celebrate we’ve hand picked a selection of the best politician fights on planet earth.

Politics has always been a heated affair, in part due to the fact that they are debating hot topics and cutting edge social discourse, but mostly because they are bigoted fat heads with plums for brains and egos the size and shape of black holes. Back in the mists of time British politics would see fights in the House of Lords and kicks in the corridors of Westminster. That no longer happens in the UK. For the simple reason that they are all on the same weaselly team nowadays, busy filling each others pockets with gold nuggets and Jacuzzis. They scratch each others balls so there’s no need to start breaking each others balls. That’s not true for other nations though, where opposing parties actually oppose each other.

This week we were treated to a joyful skirmish courtesy of two Georgian politicians, one of which is a member of the wonderfully named Georgian Dream Party. If you didn’t catch that this week, here it is. A smashed glass and a right hook wouldn’t exactly win you any prizes in UFC, but these guys are supposed to be well educated, well respected men responsible for law, order and a whole country:

Feeling lightly amused and bemused I looked on and found some Czech politicians playing slapsy in front of a home crowd a few years ago. This one is straight out of the blue. Hilarious:

Brilliant isn’t it. Imagine you are at work, whatever you do, maybe an office or whatever, and you’re doing a big presentation on camera for some bigwigs at head office, and you just stroll over to your colleague and whack him hard round the back of his bonce. You would lose your job of course, but you would also be universally considered a bell end. It’s amazing that they think it’s OK. I mean that slap wasn’t even in the “heat of the moment”. It was defo planned.

â˜›  Watch Next: Chris Rock Explains Why Barack Obama Is A White Guy

Next up are some Pakistani politicians having a bust up on the telly box. More glass smashing coming your way, the action starts at about 1:00:

Now over to Iraq where we find a couple of Iraqi politicians scrapping on a show which is paradoxically called “Democracy”. Apparently one is pro-Saddam Hussein and the other is anti. Mr Pro gives a smasher of a right hook, then frustratingly the rest of the action continues off screen. I wish it was the pro-Saddam guy that had laid the woop down.

More scrapping on the next page…