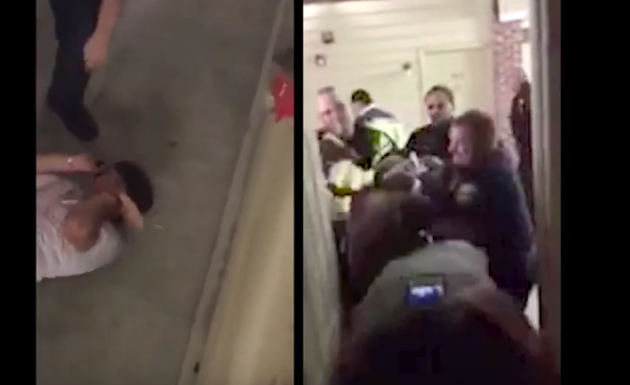 Definitely not how you want your house party to end.

A series of videos shared online shows police officers in Tuscaloosa, Alabama dragging three students – all University of Alabama students – from their accommodation and battering one with a club and stun gun.

The visit was “a result of a loud music call” just after 3am on Saturday. One officer argues with the students over whether he’s allowed into their apartment without a search warrant (he’s not). It escalated from there and this was the result:

(This is a collection of videos someone kindly put together to show multiple angles.)

Well, I think anyone watching that will agree that the level of aggression and violence used by the cops there was in no way warranted. They pretty much dragged the kid to the ground and beat the shit out of him when he wasn’t even fighting back or anything. Not a good look for the Alabama police force that’s for sure. How about just stick on some handcuffs next time?

The good news is the footage has resulted in three officers being placed on administrative leave while the incident is investigated.

Still it’s important to remember that not all police officers are bad – like this one who gave a teenage girl with a rare disease the best surprise ever.