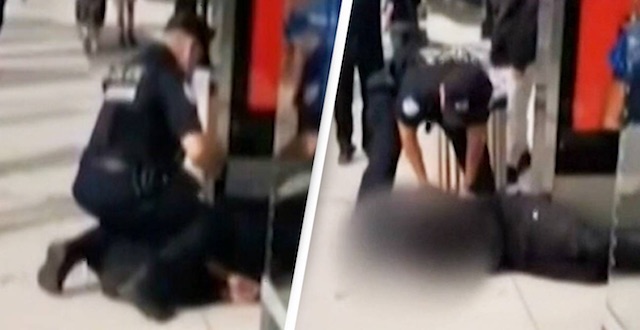 It’s been about a year since Derek Chavuin kneeled on George Floyd’s neck and sent the whole world into meltdown about it, but it seems like some people still haven’t learned that it’s a really bad idea to restrain a suspect like that after a cop in Montreal was filmed with his knees all over a 14 year old black boy’s back for longer than a minute.

The cops were called to a fight between more than a dozen school children back on June 10th and the official line is that the child in question was arrested because he was carrying a stun gun. That’s all very well and good, but in the video below it seems as though the kid is handcuffed and restrained so there’s no real need for the cop to be kneeling on his neck and the situation has obviously been exasperated by the fact that he’s black and everything else that has been going on in the past year. You would think that some of that would have permeated into the minds of all policemen in the world, but I guess this really hasn’t been the case?

Yeah that doesn’t look great there does it? Inspector David Shane has told the media that the video doesn’t show the full story and that the situation is under review, but I’m not really sure what the kid could have been doing to justify that treatment.

Other Canadian politicians have called for an investigation into what was going on as well with local city councillor Abdelhaq Sari saying that the incident raised ‘serious questions’ of the SVPM:

An independent investigation will have to be carried out… this kind of arrest technique should only be used in cases of imminent danger.

This is certainly not the case when the suspect is handcuffed.

I imagine that some kind of wishy washy statement will emerge in the next couple of weeks trying to gloss over the situation, but I’m surprised there hasn’t been more of an outrage. I guess the guy being held down on the floor has to be murdered for people to really take notice.

For more of the same, check out when this Met Police Officer kneeled on a suspect’s neck about a week after the George Floyd incident. So idiotic.