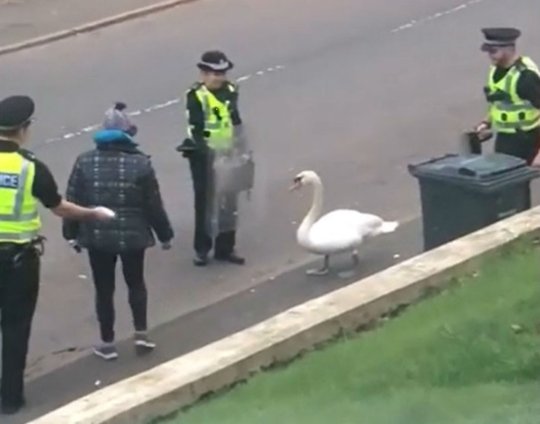 Our tax money hard at work.

There’s no doubt that there’s a shortage of police in this country right now – what with the humongous increase in knife crime in the last few years – but someohow it’s possible for three of the nation’s finest and two police vans to spend half an hour messing around with getting a rogue duck back into its home.

The scene unfolded yesterday in Murdieston Park in Inverclyde, where the wild duck had strayed from its home in the park to the other side of Inverkip Road. The police were called to shepherd it home, but apparently this required two police vans, three policemen, riot shields and loafs of bread to get it back there – and then it still took half an hour. What a great use of resources.

Dumbfounded citizen Alison Robertson filmed the operation from inside her home and had the following to say about it:

From when it lands on the main road to getting it back up to the dam, the whole thing lasted about 30 minutes.

Even the Swans in Greenock are mental.

I mean, I dunno what crime is like in Greenock I’ll be honest, but surely police officers can spend some of their time doing things more useful than this to benefit the community? You’ve gotta think that someone is selling drugs or robbing someone or doing something that’s more detrimental to society than this duck waddling around. Honestly the state of it all.

For more ducks, check out this dumb story about a duck going to the pub. Really is something else.