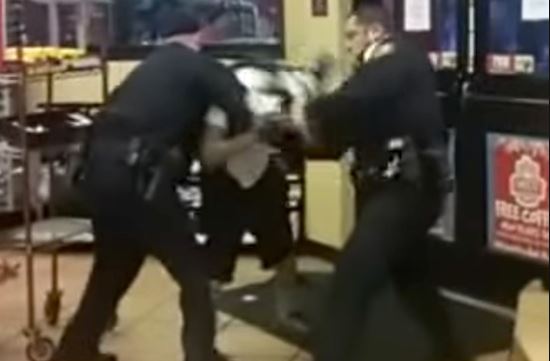 Does getting into a punch-up with police ever end well? Not that I’ve seen. I mean yeah we’ve seen some impressive escapes from cops over the years, but none of those involved violence, just pure skill and a little bit of luck.

This dude went for some next level crackhead tactic of smashing his own head into a glass door, before turning around and trying to take these two cops on 2-on-1.

It didn’t end well for him. Via the uploader:

Props to Hagerstown Police for handling it very professionally. I am very impressed. This was wild. I was ordering a sub seconds before this happened. This recording was for the protection of everyone involved. The man was bashing his own head. The police did not do that. This was the entire incident minus a few seconds. This is unedited to prevent scrutiny. I did not alter the video. As far as I can tell the use of force was justified.

Sweet little combo there. Nice flurry of uppercuts followed by the leg sweep – beautiful stuff. All clean and by the book too when you consider what they’re dealing with.

For the crook, nearly as ineffective as trying to escape from the police on your skateboard – that never ends well.