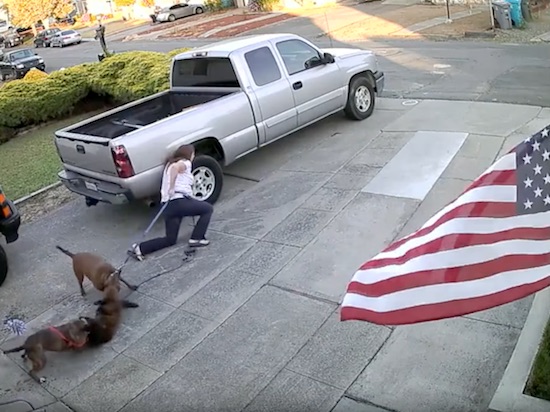 No bad pets, only bad owners.

Pitbulls often get a bad rep for being savage violent animals and with videos like the one below you can understand why this is the case.

In the video, you can clearly see that the pitbulls are absolutely rabid when they spot a cat chilling on its own in the driveway. Even though they’re both on leashes they manage to escape from their owner who’s walking them and truly maul this poor little cat. It’s like the owner has absolutely no control over them at all, which isn’t how you should be treating animals like that because if they’re left to their own devices they can be pretty goddamn brutal:

Those pitbulls wasn’t messing around was it? The owner should be ashamed of herself though – why the heck would you buy two pitbulls when you can’t even control one of them. You know what they say – no bad pets, only bad owners.

For more of the same, check out this pitbull attacking its owners after they’ve forced him to wear a jumper. Don’t mess.