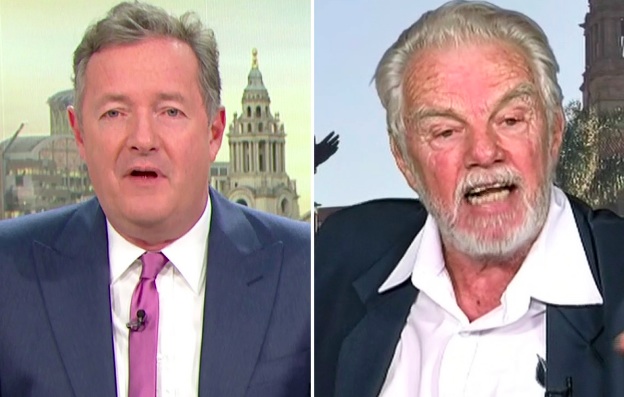 For once we actually agree with what Piers Morgan is saying.

Most people aren’t too fond of the Good Morning Britain host Piers Morgan because, let’s face it, he’s a bit of a pompous a-hole.

However, on the rare occasion we find ourselves on the same side as one of his loud-mouthed rants – today included.

On this morning’s episode of the show, the former Daily Fail journalist went head-to-head with trophy hunter Ron Thomson, a man who has killed 5000 elephants, 800 buffalo, 600 lions, 50 hippos and 40 leopards and admitted that he felt no emotion when carrying out the brutal attacks.

As Piers points out, the South African hunter caused outrage by describing the sense of pride he felt by what he’d done.

Although Thomson, 77, uses the rather flimsy excuse of animal population management, the number of elephants globally has tragically dropped from 1.3 million to just 400,000. Thomson alone is responsible for 5000 of those deaths.

In response to the hunter’s actions and his attitude towards the killings, Piers said:

You’ve shown complete detachment for the reality of what you’ve done.

Decade after decade you and your mates have gone out and blazed away at these elephants and it doesn’t seem to have had any impact on you whatsoever.

I simply say to you: Is there not a more humane way you could do this?

To which the trophy hunter replied:

All I’m telling you is that I was highly efficient at it. I went in and got the job done. I would rather have done the shooting than get some other guy who comes in and pays the bottom dollar to be able to say, ‘Please let me come and shoot them’. 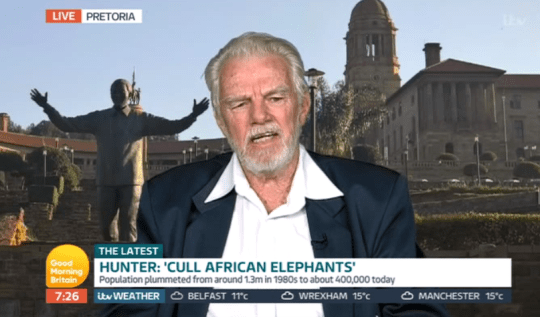 With such a controversial topic at the centre of this debate, the viewers at home had a fair few opinions of their own. Just check out some of the comments that made their way to Twitter this morning:

Get a load of this idiot, justifying killing innocent elephants by making space for others, but he wouldn’t say the same thing about the overpopulation of humans.

The irony of this pretentious arse saying that elephants should be culled because they destroy habitats. Humans have caused the greatest damage to the environment, do you propose to start culling them too?

What a devil Ron Thomson is thinking he has the right to slaughter elephants. How dare he!

Well put – what an absolute evil dickhead this Ron Thomson guy is. Not only does he kill beautiful creatures for unjust reasons, but he caused us to actually agree with Piers Morgan.

For the other time we were Team Piers, check out this video in which he completely decimated the former EDL leader Tommy Robinson.