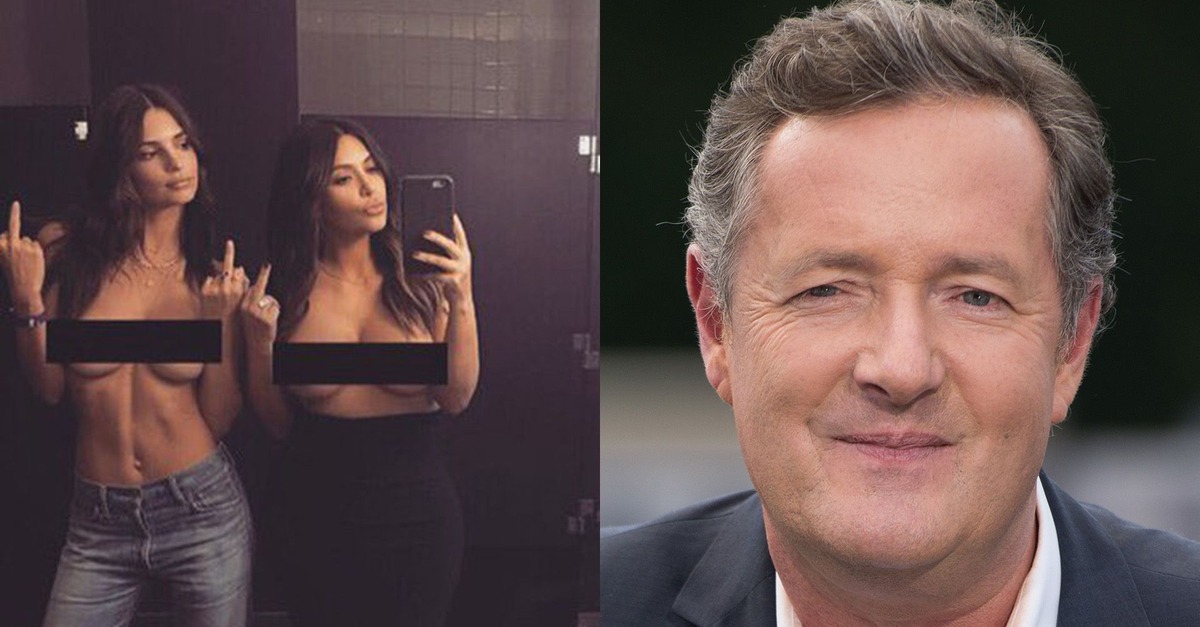 One Tweet really exposes Piers for the hypocrite he is.

Piers Morgan doesn’t have the greatest track record when it comes to endearing himself to female celebrities — remember when Chelsea Handler ripped his balls off and fed them to him on his own show?

Well there’s no way he could’ve thought that wading in on the naked Kim Kardashian / Emily Ratajkowski selfie that leaked online last night would be a good idea, but he did it anyway.

Here’s the selfie if you’ve not seen it:

Here’s what Piers had to say about it:

Just a thought @KimKardashian @emrata – but you could always try wearing a little dignity?pic.twitter.com/ce4qEvn0ls

Oh Emily, enough of this nonsensical pseudo-feminist gibberish. If not for me, then for Emmeline. https://t.co/VuMgX6KWQW

And the inevitable backlash that followed:

@piersmorgan is a body-shaming, slut-shaming, female-shaming piece of shit who needs to delete his fucking Twitter.

@piersmorgan it's her body she can do whatever she wishes to with it… You're a prime example of why we need feminism.

Why is @piersmorgan having an absolute meltdown over Kim Kardashian's pictures. She has a right to exercise her free will. Non-issue.

I don’t know that it’s “slut-shaming” to suggest that maybe Kim Kardashian doesn’t need to get naked on social media every single day of her life, but Piers’s Tweets come off a little more hateful than that. That’s just what Piers Morgan does I suppose — he talks shit about people for a living, and Kardashian gets naked for a living. The perfect match for inconsequential Internet beef really.