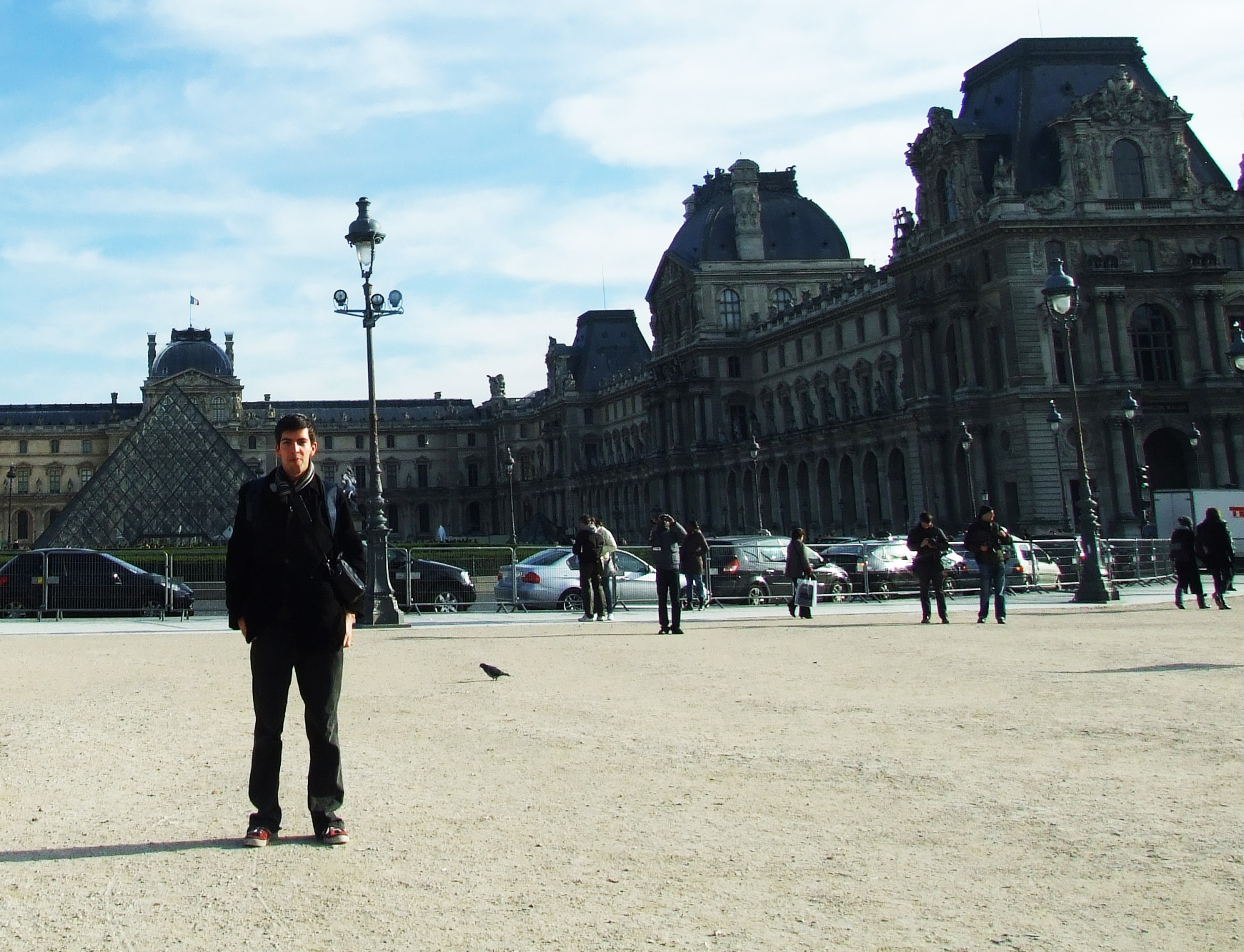 Slatz takes you through his adventures in Paris, encountering beggars, dodgy tour guides, twilight cruises and a role in a film. 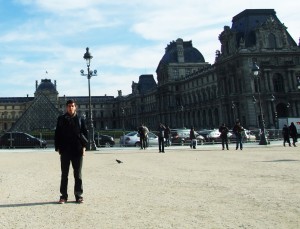 After my eventful first day in Paris, my remaining four nights in the French capital would prove marginally more sedate but not by much.

Leaving Montmartre behind, I headed on the metro to the heart of central Paris and the feast of modern art available at the Pompidou Centre. The exhbitions are primary spread across two floors, one dedicated to each half of the twentieth century. The recent works include this “femi-art” gem (now factually incorrect due to Kathryn Bigelow): 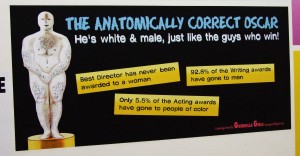 Despite snapping a shot of this, I had to be vigilante with my camera around the museum. I was first ticked off at for using my flash to snap a tree-like sculpture constructed of blood red inflatated gloves [below] and then requested to leave the museum’s restaurant as my photos might record people who didn’t wish to be captured on film. 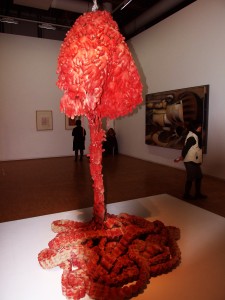 As the galleries were so expansive, I decided to see the rest of it in the evening and spend the remainder of the afternoon in and around Notre Dame cathedral.

On arrival outside the Gothic edifice, I was pestered by beggars posing as the deaf  who seemed sure I’d sign a petition (for what, I have no idea) trying to attract me by blowing kisses and waggling clipboards suggestively in my direction.

Having none of it, I proceeded to the archeological remains underneath the cathedral. Upon finding out that I was English, the ticket agent handed me what resembled a sandwich board onto which were printed translations of the labels next to the artifacts. Surprisingly, none of the other visitors seemed to be carrying around these large pieces of cardboard…

Following my night visit to the Pompidou Centre, my suspicions about receiving slightly different (but nonetheless helpful) service from my French brothers and sisters was confirmed when I headed to a bistro to catch the friendly international between France and England.

The waiters twigged my Anglo-heritage almost as soon as I sat down and humoured me at first by responding in French to my efforts at conversation. But the bow-tied brigade gradually slipped in more English responses and between quick glances we got our points across as we watched the game.

They grabbed the first psychological blow by humming their anthem quietly and then turning to me, silent, as God Save the Queen rung out at Wembley. Part of me wanted to stand and bellow it out but my stomach sensibly negated that response.

Grins flashed across their faces when Karim Benzema swept in before snapping back to the neutral expressions commonplace across the Parisian waiters’ fraternity. By the time Mathieu Valbuena polished off the game, I was on my post-meal tea and glugged it down fast as a fellow customer expounded upon the beauty of France’s football. I had already vacated the establishment when Peter Crouch grabbed a consolation although I doubt the lanky robotic forward’s goal would have been enough to save face.

The following morning’s newspaper headlines of “C’est Si Bon” (It’s so good) pretty much summed up the atmosphere in the city after the result – I was like get over it, it’s only a friendly. I spent the early part of the day at another French institution besides football; the jails used to imprison enemies of the revolution before many were sent to their execution – the Conciergerie.

Installed in the Hall of the Guards (the largest section of the old building) was a special exhibition on the way France’s monuments have been used in movies. It was also a chance for me to appear on some celluloid too.

Positioning myself in the cut-away rear from a Citroen 2CV, a film playing on a screen through the rear simulated the effect of riding in the back of a car and naturally I couldn’t resist giving it a go. 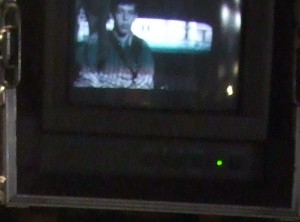 Later on I found a large bluescreen and complete with “costumes” by its side to add to the effect. I grabbed a Native American head-dress without knowing what was on the backdrop and wondered into the shot which looked rather Middle Earth. 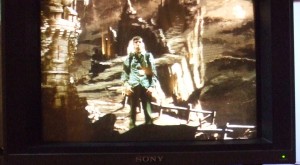 Foregoing post-production, I left the Conciergerie and headed for the stunning stain glass of the Sainte Chappelle, encountering a rather surreal queue where I was told that this wasn’t the correct line for the medieval chapel but that no one knew where the actual entrance was or whether it was open. Thankfully, a policeman directed me to the right place and although I had to traverse through a class of unruly Parisian school-children, I was able to see inside the church. 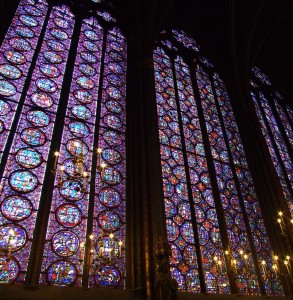 As the sun began to set, I thought I’d take a picturesque walk along Paris’s oldest bridge – the Pont Neuf – before devoting the rest of the evening to the Musee d’Orsay, an art gallery set in the evocative neoclassical surroundings of what was once a train station.

But whilst admiring the view from the bridge, I saw out of the corner of my eye a woman pick up a ring from the floor.

I replied in the negative but she insisted I take it and after a few more refusals, I eventually accepted the suspiciously light ring to get her out of my hair. Thinking nothing of it, I spent a few more minutes taking some photos over the river Seine before walking the rest of the distance over the Pont Neuf to the other side.

In front of me, at the end of the walkway, stood the woman.

“Please,” she uttered. “Manger” (to eat) and she emphasised this by pointing to her throat. Realising the scam I’d been subjected to I felt it would be simpler to hand her some loose change than reprimand her for the ring stunt. The swindle was presumably meant to make one feel like their “good karma” (if you believe in such things) needed balancing by an act of charity.

Asking first for the English money which I had already emptied from my wallet (she clearly wasn’t aware of the pounds’ dwindling interest rating) the hag took some French coins from me and I strolled off.

From behind me she cried out “I said manger! This is nothing! Give back my ring!”. I swivelled round and retreived the ring from my pocket, dropping it in her hand. Muttering some obsenity in an unknown language she wandered off. I realise now this is a common trick, albeit a straightforward one to get embroiled in.

My last day in the metropolis was occupied with the enormous Louvre [pictured at the top of the page] where I was subjected to a hick of a tour guide.  This plump middle-aged American compared ancient Greece to a small town in Indiana and suggested that the Winged Victory [below] was like someone celebrating a touchdown in the Superbowl. 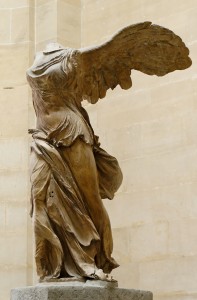 Managing to escape the guided tour, I made my way round Napoleon III’s appartments in another part of the building where an old woman slipped in front me (no contact, honest) and crashed onto the floor. She was fine although a little shaken but I figured that might be a good time to vacate the Louvre and return to the waterways to take a twilight cruise along the Seine. 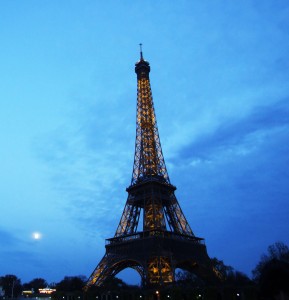 However it was then about time for me to return to Gare Du Nord in order to take the Eurostar back into London and terminate my Paris misadventure, safe in the knowledge that a little piece of Slatz would always J’habite there.