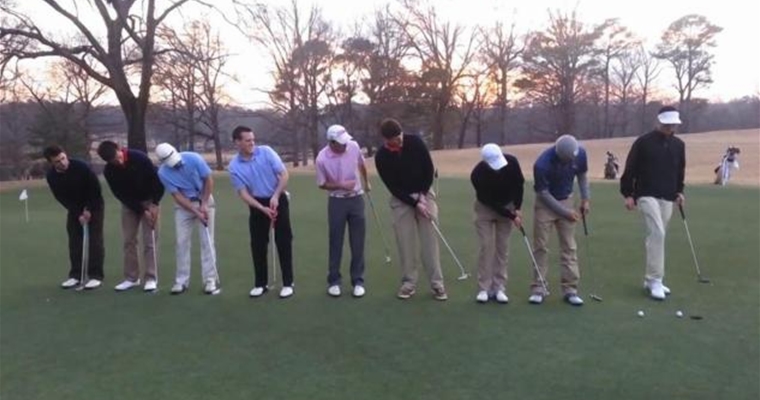 Agreed, golf is rubbish, but these nine fellas do it with a touch of pzazz so I’m going to let them off…. Just this once mind you. Nine balls, one hole.

Here at the Sick Chirpse multiverse HQ we think that golf is both lame and turd, and that the people who endorse and play golf are ming mongs and nerdowells. However, we also appreciate something when it is done with style and panache with a totes tekkers approach. But in case your blood is boiling as we speak, I promise this will be the last golf post I ever write. Unless in a few years time there’s some kind of zombie golf league created, or Swedish topless golf. I would report on either of those to be honest. Or maybe if Justin Beiber gets old and fat and dies on a golf course, I’d cover that too.

This jazzy ball whack took place last week at Campbell’s University PGA Golf Management program. Each team has to see if they can complete the mighty impressive nine ball putt. I could not bear to read anymore about puke trousered golfers so that’s the only deets I am going to furnish you with, and you can thank me for that.

â˜› Watch Next: Most Boring Sport Ever – National Ploughing Matches

So yeah, nine golfers, nine balls, one hole. Not the title of the worst smut flick ever, but the title of this eloquent maneuver. They all line up and smack in the balls:

After watching that I thought I would have look for some other videos, see if there was anything else worth watching in the world of golf. Despite coming across videos of “urban golfers” hitting their balls around a skate park, I can categorically announce that there is nothing cool about golf and there never will be (except the zombie/Swedish things I mentioned earlier.)

But I’ll leave this with you all the same, it’s 7 seconds and it’s simply a guy shouting “mashed potatoes” as a golfer hits the ball. I did laugh, yes. An oldie but a goodie.