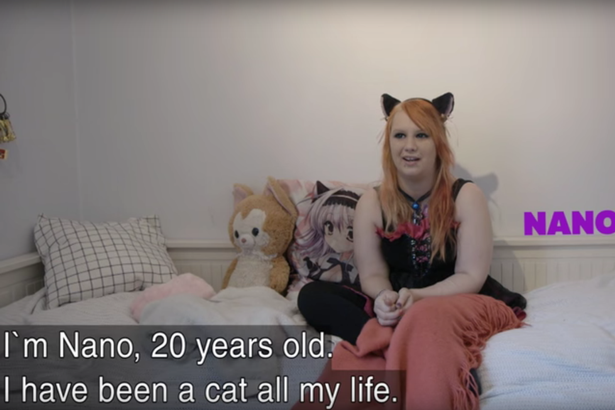 20-year-old Nana from Oslo, Norway says she first realised she was a cat when she was 16 and doctors told her she has a “genetic defect”.

She claims to have “heightened senses” and hisses at dogs and hates water. She also likes wearing cat ears and a tail and goes “meow” a lot.

You really need to see her in action for yourself:

I don’t really want to make fun of her too much because there’s every chance we’re dealing with some serious mental defects here (as opposed to “genetic”). But at the same time you have to admit that watching her hiss at dogs, meow out the window and crawl around on the floor like an actual cat is laugh out loud funny.

The one thing that really kills her whole argument though is the fact she’s never caught a mouse. I can’t believe she actually admitted that. What cat do you know that’s never in its life caught a mouse? Sorry Nano but I think you should pretend to be another animal until you actually catch a meal and earn the right to be a cat.

Can totally see why you’d want to be one though.