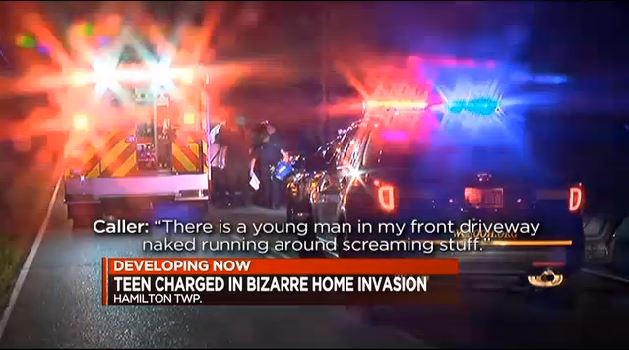 This kid had one hell of a trip.

A naked 17-year-old who was blatantly on something tried to break into the home of a couple in Ohio this week, and ended up pulling off the most outrageous reaction to getting shot ever.

The homeowners, a married couple, called 911 as they tried to engage the kid in conversation to keep him calm, and at one point dispatchers heard the female homeowner tell him “Stay away from me, you will get shot.”

The kid went to grab her around the throat and the woman’s husband had no choice but to shoot him in the back with his shotgun.

When police officers arrived on scene, he was still highly sexualized because when the officer attempted to arrest him, he assaulted the officer in the groin area.

The teen was taken to hospital and is expected to recover, and will be charged with attempted burglary, attempted rape, assault on police and public indecency.

He just seemed a little off, like he wasn’t really himself. He’s been under a lot of stress lately with graduation and everything.

One hell of a trip in any case, though not the first time we’ve seen someone’s horniness get the better of them while tripping balls.