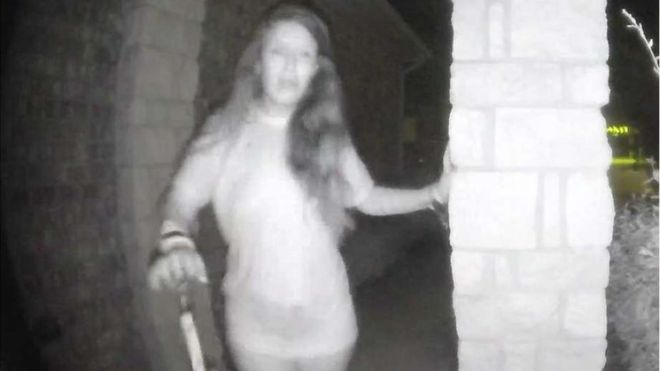 The plots of so many scary movies involve scary lunatics wandering around in the dark breaking into houses and killing people, so when it starts happening in real life no wonder people are going to start losing their shit about it.

We’re over in Sunrise Ranch, Montgomery, Texas for this one where on Friday night at around 3:20 am a woman was wandering around ringing people’s doorbells. To make matters worse, she full on looked like she had escaped from a mental institution as she was semi clothed and had what looks like arm restraints hanging off her wrists.

Needless to say everyone was shit scared and didn’t let her in and now the police are desperately looking for her as they fear she may be a harm to herself or others. Here’s a news report on the incident:

Geez I mean that is freaking creepy isn’t it. Especially the fact that it doesn’t even sound like she was trying to get into any of the houses and more like she was playing some super creeped out version of Knock Door Run or what have you. Really freaky.

Considering that this story has now gone viral all over the goddamn world now, it’s also kinda crazy that nobody has managed to come forward and identify this woman and explain what the hell was going on. Maybe she actually is an escaped mental patient or perhaps even a ghost? I’ve kinda got a feeling that we’ll never know to be honest.

For more creepy women, check out this woman who is baffling the world with her creepy feet that are like fingers. Seriously weird.