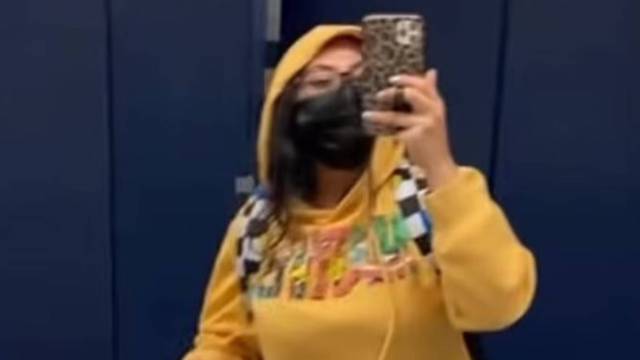 There have been some really weird and wonderful stories on Sick Chirpse over the years and whilst this isn’t the weirdest that we’ve ever covered, it’s definitely got an air of strangeness about it that I don’t think I’ve ever seen before.

30 year old Casey Garcia from El Paso, Texas wanted to prove that security wasn’t up to scratch at her 13 year old daughter’s school and so decided to dye her hair and dress up as the teenager and attend all her classes at Garcia-Enriquez Middle School. Even more bizarrely, Garcia decided to post a video of the day on her YouTube channel which obviously meant that it was ridiculously easy for the police to book her for it as well, charging her with criminal trespassing, tampering with government records and an unrelated traffic violation.

The video isn’t even that good and Garcia has also explained why she pulled off the stunt in another one:

We need better security at our schools, this is what I tried to prove, and I don’t mean to be curt but I kind of feel like I proved it.

I think the deal breaker for me was actually walking in and posing as a seventh grader. I mean I’m no spring chicken, but it wasn’t hard and I made it to all seven periods.

Not really sure what she’s trying to prove here? I suppose school security is a bigger deal over in the US because there are so many school shootings for some unknown reason, but even so I think there are probably like a thousand people at this high school so it’s kind of hard to call them out about it, especially when it kinda looks like she was trying to be as discreet and hidden as possible.

I guess this does draw attention to the fact that people can get in and out of schools fairly easily, but I think this is really not going to be a humongous problem in most cases. Hope that this school manages to fix it and the whole escapade was worth it for Garcia, who might be facing a massive fine or even jail time. Seems legit.

For more of the same, check out these guys who created a fake genie to fool a doctor into paying £72,000 for an ancient lamp. Seems worth it.