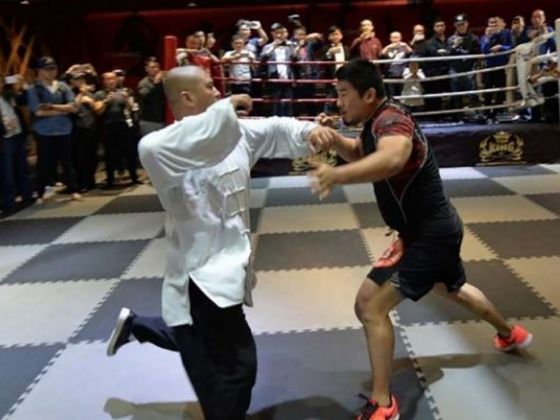 When it comes to combat sports, MMA seems to be the master with regards to popularity. So much so that I wasn’t really aware that there was a rivalry between it and traditional martial arts like Tai Chi, but apparently this is a big thing in China.

So much of a big thing in fact that an old Tai Chi master named Wei Lei wanted to test an MMA fighter to prove that the ancient arts were better than the modern style. Unfortunately, his fight with MMA fighter Xu Xiaodong in Chengdu was over in 10 seconds and ended with him getting the crap kicked out of him. Take a look:

Ouch. Guess the old arts aren’t as good as the new ones huh Wei Lei? He just can’t take those head punches.

Despite Lei getting battered, Xiaodong has revealed that a whole bunch of old masters are challenging him to fight. He isn’t even remotely phased about it either, saying that he could take two or three of them at once, which has prompted this outburst/promo from a guy called Xing Lu, who is president of the Sichuan Tai Chi Pushing Hands Research Institute:

He is deeply biased against the traditional martial arts and his words were insulting.

I challenged him so he could have a fresh perspective of Tai Chi and the true traditional martial arts.

I am 80% sure of winning the fight as tai chi masters have an iron fist, air foot and iron back, which need more than 20 years of hard practice.

Well, that’s great fighting talk, but considering your mate got battered in 10 seconds, I’m not sure you should be so confident. Would love to see this fight though – would probably smash PPV records in China or something.

For more of the same (kinda), check out these awesome photographs of Shaolin monks training. Intense.