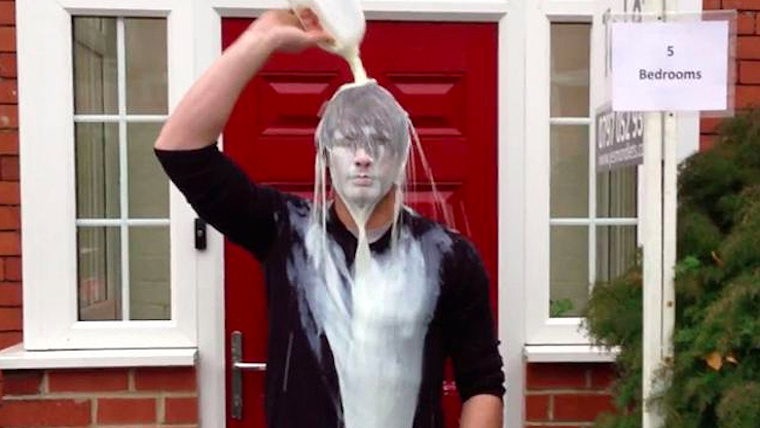 Milking involves students pouring four pint cartons of milk over their heads and after could possibly be even more pointless than planking. It began in Newcastle, obviously.

Remember when planking was big about 18 months ago or something? Man was that annoying. You would just login to your Facebook and there would be some twat you used to go to school with  or some fvcking schweffe who lived on your corridor in your first year of uni would be planking across a railway line or over their desk at work or something and thinking he was really funny, when the thing was everyone was fvcking doing it  and it wasn’t even funny in the first place so it just made him look like a twat. I know the righteous out there would be like ‘why the hell don’t you just delete these idiots from Facebook then’ and whilst this is an obvious way to get them to stop annoying me the truth is that looking at their dumb little profiles really does make me laugh a lot of the time. The things people want to share with people they hardly even know huh?  Then of course you had batmanning and horsemanning and breading which were even dumber than planking and way harder, but fortunately they didn’t pick up.

I had hoped against hope that all these stupid -ing activities and the annoying people associated with them had dropped off the face of the earth as I hadn’t even heard anyone SAY planking let alone actually do it in the past six months or something. Unfortunately it looks like a new fad has popped up to replace it, which is even dumber than planking. It’s called milking and when I first read about it I thought it was getting a pint of milk and throwing it all over someone else – which admittedly would have been kinda funny – but it isn’t actually that. It’s getting a four pint carton of milk and pouring it all over YOURSELF. I guess that’s kind of funny for other people watching you but I feel like it would just be really fvcking annoying for the person who’s doing the milking/being milked/how do you say that?

I mean there would be fvcking milk all over your clothes and hair, it would be gross and everyone would be laughing at you, there’s no benefit at all. I mean planking might have been slightly difficult depending where you were doing it but it was never going to be really gross and annoying (except for it bombarding people’s news feeds, but that’s a different kind of annoying to getting all milk everywhere) like this would be. It’s the worst and just seems really stupid, although in the video below some of it is kinda funny. In more of a stupid kind of way though.

Milking was devised by some students (obviously) up in Newcastle University but since the video has been uploaded there have also been videos also filmed in Oxford and Edinburgh. The guy behind the video has been identified as Tom Morris, who explained the rationale behind his decision to film all this milking: ‘We were just in our kitchen talking about doing it outside Starbucks in Jesmond and thought it would be really funny. We did that, uploaded the video to Facebook and got a load of likes. So then we thought “why not just make a video”?’ Great idea Tom, you’ve started another really annoying student viral internet sensation. I bet he’s really proud of himself. Hopefully all the money he (won’t) make from milking and dossing about milking himself (still not sure if this is the right way to say this?) will  help him pay off his student loan when he’s done with university.

In the original Newcastle video there’s a bunch of ‘milkings’ all over the city in places like the middle of a roundabout, a bar, a tree, outside the supermarket and in the middle of the road. I appreciate that milking is still in its infancy but you think they might have been able to do it in some better places than that, it just sounds really fvcking boring. I mean Newcastle has a bridge and the Angel of the North is there, maybe they could have tried to do something in one of those locations? Although the one where two of them pop out of wheelie bins side by side is pretty awesome.  Mostly it’s just fairly lame and badly shot and why the fvck is the idiot holding the camera the wrong way round!?!?  The Oxford one is even lamer because it’s just 21 seconds of some guy outside his house. Urgh. Milking, let’s hope it doesn’t take off.