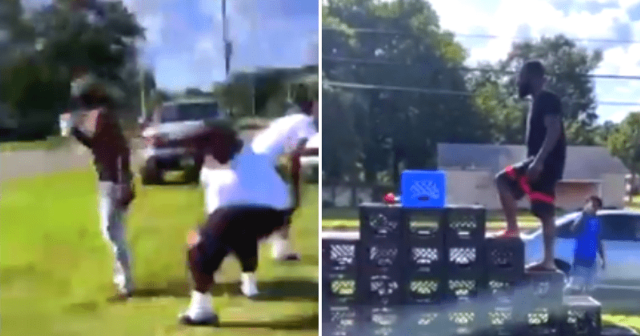 The #MilkCrateChallenge is getting out of control.

If you’re going to catch rival gang members slipping (literally), I guess there’s no better time than when they’re in the midst of the #MilkCrateChallenge.

At least three people, including a teenage girl, were killed in a drive-by shooting in Louisiana this week when a group gathered outside to film themselves attempting the viral challenge.

Scary stuff. I’m not sure if anyone who was captured on film there was amongst the victims, but they could have at least let that dude finish the challenge before opening fire. In fact maybe he did complete it for all we know, and all while bullets were flying around him! That would be a gold medal Milk Crate champion right there, for sure.

Perhaps we shouldn’t be making jokes though, because as Newsweek reported, three people ended up dead. One was later identified as 19-year-old Paris King, who was found dead in the back seat of a car, a little further from where the Milk Crate Challenge was taking place. Cops said that they believe the two crime scenes are related.

There’s no mention in the article about it being gang-related, but I think when someone rides by in a car starts shooting at a group of people in public, it usually is. Sadly the people getting shot at are not always part of the opposing gang. Thoughts & prayers with the friends and families of the victims. The sooner America gets its gun problem under control, the better.

To watch an absolute scumbag kick a milk crate from underneath someone who was mid-way through the challenge, click HERE. What should be the punishment for that?