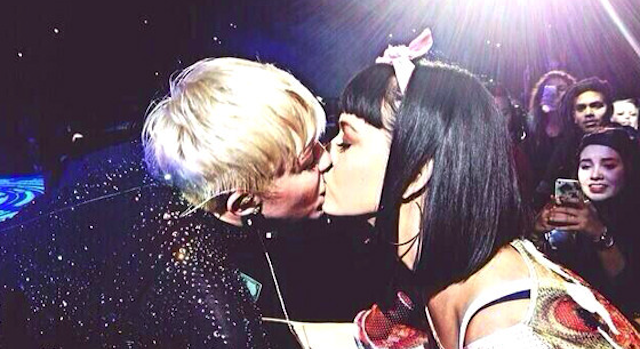 The two female pop stars locked lips on Saturday night and one smooth fan caught it on Instagram video.

I’m sure a load of people are gonna moan at us for posting this but I bet every single one of them clicked on it because they just wouldn’t be able to resist seeing two mega celebrity babes making out – it’s just ingrained in our nature. We all know that Katy Perry likes kissing girls, but it might be a (slight) surprise that Miley Cyrus does too, although given fact she has the hairstyle of a lesbian these days and some of her recent photoshoots it probably isn’t that surprising.

The kiss took place on Saturday night as part of Miley’s Bangerz tour at the Staples Centre in Los Angeles and is about as impressive as you might imagine it to be i.e. not very. The best thing about it is probably Miley Cyrus’ reaction as she looks kind of like Joseph Gordon Levitt after he’s had sex with Zooey Deschanel in 500 Days Of Summer i.e. very pleased with herself and utterly besotted with the object of her affection.

â˜› More Kissing: Kiss Filmed From Inside Your Mouth Is Kind Of Gross