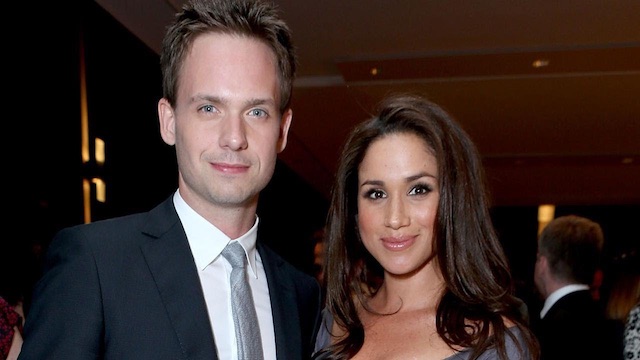 He’s not holding back.

The battle lines have well and truly been drawn ahead of Meghan Markle’s interview on Oprah Winfrey (let’s just call it what it is because we all know it’s her and not Prince Harry) on Sunday and it’s probably no surprise to see that Markle’s co star on ‘Suits’ Patrick J. Adams has decided to firmly plant his flag on her side.

Adams starred with Meghan on the show for seven years from 2011 – 2018 and was in attendance at the Royal Wedding. He took to Twitter to take aim at the Royal Family in a scathing tirade:

She has always been a powerful woman with a deep sense of morality and a fierce work ethic and has never been afraid to speak up, be heard and defend herself and those she holds dear. Like the rest of the world, I have watched her navigate the last few years in astonishment.

It sickened me to read the endless racist, slanderous, clickbaiting vitriol spewed in her direction from all manner of media across the UK and the world but I also knew that Meghan was stronger than people realized or understood and they would regret underestimating her.

It’s OBSCENE that the Royal Family, who’s newest member is currently GROWING INSIDE OF HER, is promoting and amplifying accusations of “bullying” against a woman who herself was basically forced to flea the UK in order protect her family and her own mental health.

Find someone else to admonish, berate and torment. My friend Meghan is way out of your league.

Wow. That’s very eloquent, passionate and well put and you could almost be mistaken for thinking that he was in love with Meghan Markle himself the way he writes it. Whether or not it’s true is anyone’s guess, although like I said before it’s certainly possible that his version of Meghan and the one that emerged once she became a member of the Royal Family can have both existed.

Who knows what’s going to happen when this interview drops on Sunday? The world will definitely be watching though, that’s for sure. Can’t wait for the fallout on Monday and a whole day of articles about this crap.

For more of the same, check out this Twitter thread that claims Meghan Markle was set up by the royal family with the whole earrings scandal. Surely not?