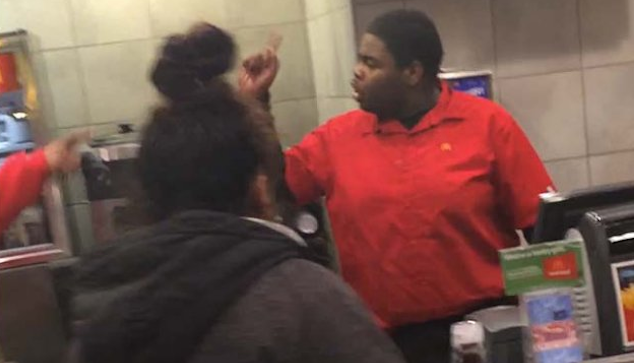 He’s not lovin’ it anymore.

Working in McDonald’s is one of those jobs that’s the absolute pits, but that a lot of people end up doing when they’re growing up in order to make ends meet and pay for all those nights out that are just so necessary back then.

Unfortunately, McDonald’s entire business model is based on low wages and high employee turnover, so it’s probably not going to be that fulfilling a career – you’re probably going to be paid barely anything to work long gruelling, boring hours. There isn’t a lot you can do about that though – unless you decide to have a complete meltdown and freak out about it like the guy in the video below.

He’s working at the McDonald’s on Snelling & University in St. Paul, Minnesota and freaks out about his crappy pay and the long hours he has to work. He’s also claiming that the restaurant owe him money and then decides to completely trash the restaurant behind the counter when he gets fired. I don’t know what he got fired for but they probably weren’t betting on this reaction – I mean it’s a job in McDonald’s in America, surely it can’t be that hard to get another job over there in any of the millions of fast food restaurants, can it?

Guy’s a definite wiener but his freakout is great and that’s what we came here to see. Good luck with your career in the service industry buddy. It’s ironic because it’s kind of similar to the freakout suffered by this woman after a McDonald’s employee refused to serve her chicken nuggets.