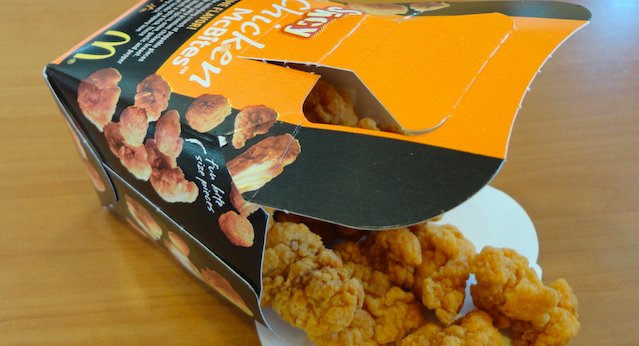 McDonalds launched their spicy chicken McBites last week but I doubt they were prepared for the avalanche of abuse that the meal would receive on Facebook.

Everyone with a brain knows that McDonalds is a completely turd place to buy food but unfortunately most of the people in the world don’t have brains so it remains as one of the most ‘popular’ fast food restaurants in the world, probably making billions of dollars every second.

However, in recent times it seems that some people are becoming more clued up about McDonalds and the crap that they pump into all of their food. I actually saw on McDonalds close down – something which I previously had never even thought possible – and Subway recently stole its crown as the most ‘popular’ (re: has the most branches) fast food outlet in the world. Subway is a pile of shit too but that’s beside the point, the fact is that McDonalds’ popularity is declining and this is definitely a good development.

It can be seen no clearer than in McDonalds recent advertising campaign to introduce their new Spicy Chicken McBites to the nation. These are like a smaller version of chicken mcnuggets – or more accurately a complete rip off of KFC’s popular popcorn chicken – and were introduced on Facebook last week. Since then, the advert has had hundreds and hundreds of comments but I don’t think a single one has been positive and most have just downright rinsed them.

Check out the best hand picked comments on the following pages: