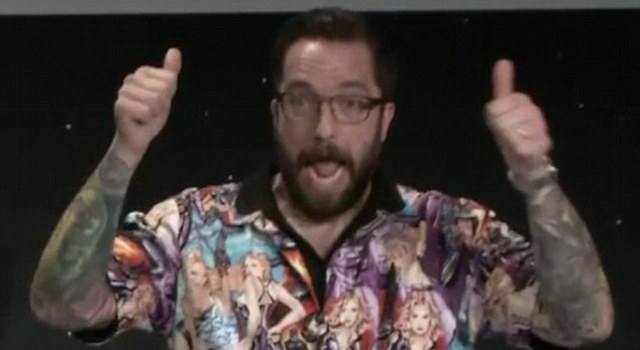 The guy just spent 10 years landing a probe on a comet FFS.

If you’ve caught the news this week you’ve no doubt heard of the European Space Agency’s groundbreaking success in landing the Philae probe on a comet, the first mission of its kind in human history and something we should all be proud of as a species.

The final success of a ten year endeavour on the part of the ESA known as the Rosetta project, and I for one am deeply glad that NASA and Russia are no longer the focus of attention in terms of Earth’s extra-terrestrial future. I was even happier to see in an ESA interview that one of the leading scientists involved was English, I heard Jerusalem playing in my head as a great swell of national pride came over me. ‘Go on my Son!’ I thought.

I noticed that the aforementioned scientist, Matthew Taylor, was wearing a shirt (see above) which most of us wouldn’t even wear as pyjamas, but I thought: ‘Well no-one’s gonna care about that, he just spent ten years landing a probe on a comet”. Well readers, I was wrong, very wrong.

The backlash against Taylor for his choice of shirt has been staggering. The main theme of argument asserts that Taylor’s shirt is an implicit reminder of how women are not welcome in the fields of physics and engineering, and that if we continue to allow such silliness to go unchecked then science will forever remain the preserve of crusty bespectacled nerds, who are ultimately male.

Now whilst I think Taylor’s clothing choice for this particular interview was a colossal exhibit in “What not to wear to work”, the ‘Shirtgate’ scandal is, at best, a stupendous overreaction to one man’s lack of tact. The level of attacks against Taylor reduced the poor man to tears in his next interview, where he gave a choked apology in front of the camera. Watching the video there’s no question that this man truly made a mistake, and is resultantly as sorry as one person could be.

My primary reaction to this utter debacle of internet-based witch hunting is one of empathy for Taylor.

I should clarify that I am by no means arguing that the protests against his shirt were totally baseless, as I do think that it’s indicative of a field where perhaps women are discouraged from entering precisely for issues such as this. To provide some context, which one of us more average types would be allowed to wear that shirt to work in an office? The answer is obviously very few, and so it could be said the Shirtgate scandal has a very realistic element of truth to it, perhaps decrying the more unseemly parts of Taylor’s field will encourage more women to enter into it, which would ultimately double the chances of us finding more geniuses to land shit on comets.

With that being said can we not cut the poor guy a bit of fucking slack? I feel an immense wave of sadness when I consider that the potentially greatest moments of this man’s life have been irreversibly tainted, purely because he made a fucking mistake in his estimation of what was a good idea to work that day. Taylor’s tattoos and previous clothing choices clearly mark him out as a bit of an eccentric, and with that in mind can we please stop this soulless pursuit of a man who just doesn’t deserve it?

While I’ve got a real genuine hatred for people who use the phrase ‘This is political correctness gone mad!’ to defend racism and sexism, you’ve really got to give it some thought on this one. Apparently nowadays something as simple as a shit shirt can serve to delete one’s achievements completely, no matter how massive. Matthew Taylor, well done for landing a probe on a comet, next time, get the interview done in your fucking underpants, just in case you offend hipsters by wearing a Coldplay hoodie.