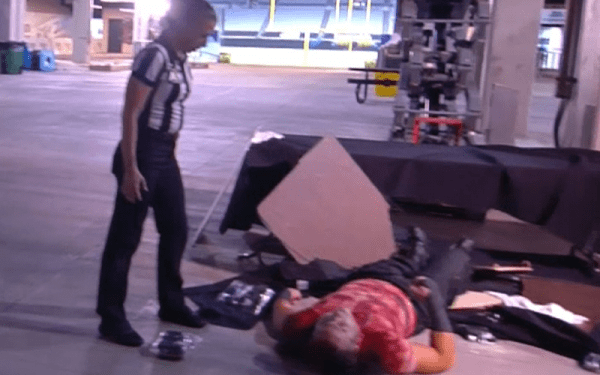 Everyone knows that wrestling is fake with the winner of each bout predetermined, but a lot of people don’t really respect how bruised and battered wrestlers get when they’re kicking the crap out of each other, even after that iconic ‘Don’t Try This At Home’ advert from the early 00s.

This also means that spots can go wrong between two wrestlers and have serious consequences, as we saw in AEW’s ‘All Out’ PPV over the weekend. Matt Hardy is somehow still wrestling and still pulling off majorly dangerous stunts like he used to 20 years ago in the WWE, only this time he actually got knocked out cold during one.

Matt was wrestling Sammy Guevara when he was speared through a table off an elevated platform. Only problem was that the pair of them missed the table and Matt’s head slammed straight into the concrete, KOing him clean:

Geez that’s actually pretty scary when you look at it isn’t it? You’re normally used to seeing wrestlers rolling around and selling whatever has happened to them whilst JR or Michael Cole screams about it to high heaven, but just seeing them lying there completely still is actually pretty eerie and scary.

Unbelievably, the match continued after Hardy woke up, but he was sent to the hospital following its conclusion to check if he had a concussion or similar. That doesn’t really sound like it should even be legal – surely someone shouldn’t be taking part in a wrestling match after they’ve just been knocked out cold? – and most people are condemning AEW for allowing it to happen, but I guess when it comes to showbiz the show really must go on. Not that cool though, hope Matt Hardy is OK.

For more of the same, check out when Matt and Jeff Hardy had the weirdest, most screwed up wrestling match of all time. That sure was something.