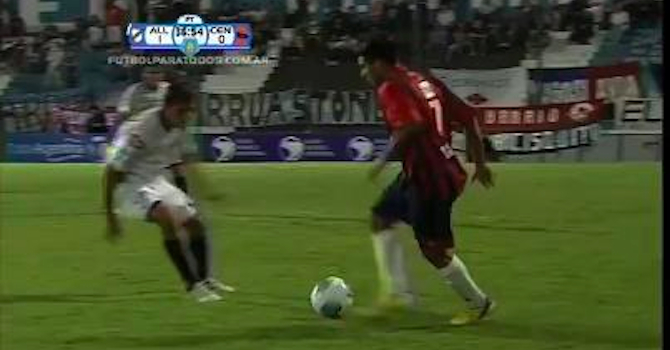 I have no idea who Mattias Mologni is but that doesn’t change the fact that this is one of the sickest skills I’ve ever seen in football ever.

Normally when there’s a headline like that you open up the article and watch the video and are immediately disappointed, well I can almost certainly guarantee that you won’t be upset with this because I was personally amazed when I saw it. I don’t think I’ve ever seen anything like this before in all the time I’ve been watching football – it’s simply sensational.

I don’t really want to describe the skill to you before you watch it because it’s probably better if you just check it out and then are like ‘WOW’ rather than if I described it here and then you watched it and you were like ‘Yeah that is pretty sick actually.’ But I’ll give you some background to what’s going on at least in the video so it isn’t completely out of context.

It’s basically some match in the Argentinian Cup between two teams I have never heard of called All Boys and Central Cordoba – a game which All Boys won 2-0. I don’t know who scored and I don’t even know how to find the goals but I doubt anyone really cares or will even remember the result or goals from the match because this game was all about Matias Mologni’s sublime skill. He’s a Cordoba player so it’s kind of surprising he was trying stuff like this out when his team was getting dicked, but it doesn’t make it any less sick.

Check out the sickest skill of the season below. As always credit has to go to 101 Great Goals for bringing this to us:

Matias Urbano Is A Sickhead