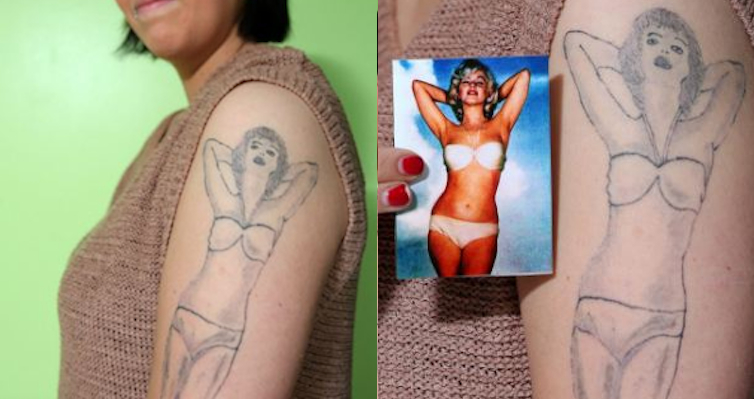 You might feel sorry for this girl and her terrible tattoo of Marilyn Monroe, but when you consider the guy who gave her the tattoo and his previous body of work you will probably just think she is a complete idiot instead.

There have been some really corking stories today but even though it’s late and it’s Friday I’m gonna type this one up because it’s DEFINITELY my favourite because everyone involved in it looks like they just stepped off the retard bus. So yeah, basically this 16 year old girl called Siobhan Fields from Burnbank, Hamilton – which is apparently in Scotland but because nobody has ever heard of it, it probably means that it really is the pits. probably worse than The Scheme or something  – wanted to pay homage to her idol Marilyn Monroe by getting a tattoo of her on her left arm. Obviously this is an excellent decision to make when you’re 16 but that isn’t even the half of it. If I was going to get a tattoo like that when I was 16 (or at any point in my life for that matter) I would at least want to make it GOOD, so I’d probably save up some money and go to a really good tattooist or something. Instead she went to this guy: 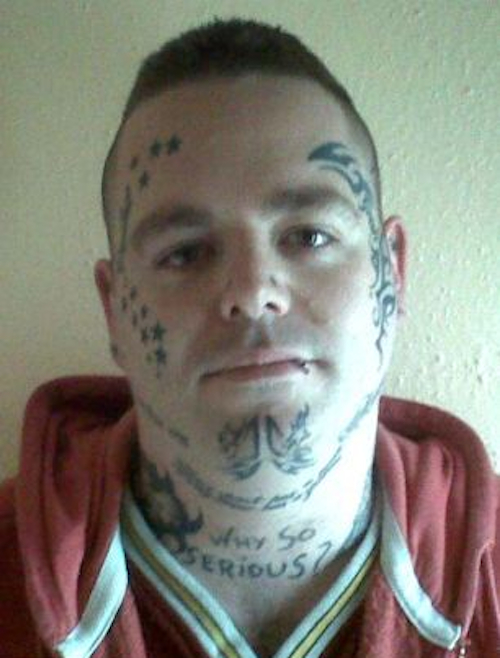 OK first of all he looks like a complete idiot, and second of all he’s got the crappest tattoos in the history of tattoos. OK maybe not as bad as some of the crappy tattoos we’ve featured on Sick Chirpse before (check some of the links towards the end of this article for them) but they’re pretty damn terrible right? If that didn’t set alarm bells off maybe the fact that he charged £50 for a massive sleeve should have done? I mean, I don’t know a lot about tattoos but I know that that is NOT an acceptable price whatsoever. I mean I paid £40 for the crappy small one colour tattoo I have on my leg in RUSSIA and that was still considered fairly cheap, so this girl really is a numbskull for thinking that she was getting a good deal out of this.

So yeah, none of these warning signs deterred her from getting a tattoo off this reprobate. Oh, and neither did the fact that he isn’t an officially licensed tattooist and decided to come round to her house to do it. Seriously, how much of an idiot did she want to be about getting something which should actually be  kinda special and important to her? Apparently as well she decided to book the tattoo with him because she came across his Facebook page – entitled Dave’s INTENZE tattooos and was ‘really impressed’ by some of the artwork. That’s the artwork that you can see below. I don’t think I need to say anything about this, it speaks for itself. 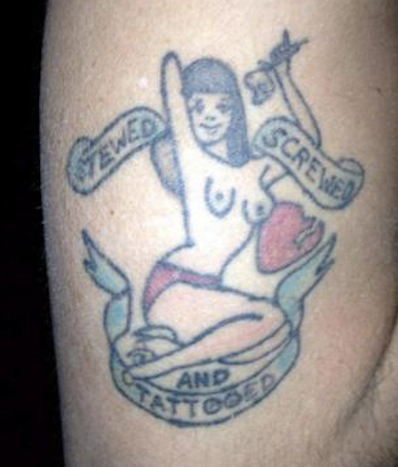 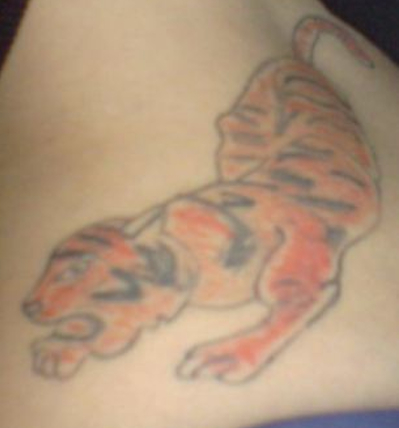 â˜› More: Synyster Ink – The Worst Tattooist On The Planet!?!

So yeah, I really honestly don’t know what she was expecting to receive when she got this tattoo other than one of the worst tattoos in the history of tattoos, there is literally no evidence to suggest anything to the contrary. Here’s what she had to say about the experience:

‘Alarm bells should have started ringing when he said he would do it round at my house. I showed him to the picture of Marilyn and he seemed very confident that he could match it.I booked an appointment and during the session I didn’t look at my arm because I’m not good with pain so I was just closing my eyes and gritted my teeth. When it was finished, after about 90 minutes, I looked in the mirror and just felt total shock. But he was quite an intimidating guy, with tattoos all over his face so I didn’t want to confront him at the time. Then I felt that I had just paid £50 for this guy to basically disfigure me for life. Later on I contacted him and asked if he could refund my money and at first he agreed but then he blocked me on Facebook and cut off all contact. It’s just one sorry looking mess and now I have to live with it.’

All of that is completely retarded, I’m sure you’ll agree. I mean first of all why did she even agree to get a tattoo off this guy if she was clearly scared of him? Why did she close her eyes and grit her teeth and not check out that tattoo. OK, OK, probably because she is used to closing her eyes and gritting her teeth, natch. I know I asked this before but WHY DID SHE THINK THE TATTOO WOULD BE GOOD WHEN SHE HAD SEEN HIS OTHER WORK!!?!! The dude shouldn’t be allowed to draw, let alone tattoo anyone, how could she not see that?

My favourite part though has to be where she blocked him on Facebook and cut off ALL contact! Surely they live in the same city there must be some way she can track him down? And like is a £50 refund even going to do ANYTHING for her? It’s gonna take at least £300 for her to cover it up, so I guess that is 1/6th of the cost but really, is it even worth getting the money off this guy? Maybe she should just avoid getting it removed and put the money towards a brain transplant instead and then maybe getting it covered up with a tattoo that doesn’t look completely awful. Just a thought huh?

I’ll leave you with how she described her new tattoo: ‘It’s horrible. It’s so embarrassing. I’ve had to go out and buy loads of long-sleeved shirts because I don’t want anyone to see it. I love Marilyn Monroe. She was absolutely beautiful – but this tattoo makes her look more like a blow-up doll.Her mouth is just a black blob, the eyes are circles, her eyes are two dots. She has black hair, the eyebrows are all wrong and there are wobbly lines everywhere’

A WAH WAH WAH! What a little baby. Hopefully this will teach her a lesson about not being an idiot, a lesson that hopefully she can utilise in the rest of her life. Here’s a picture of the lucky lady with her full sleeve, I guess in fairness she doesn’t look like the sharpest knife in the drawer.

â˜› More: This Is Why Retards Shouldn’t Tattoo 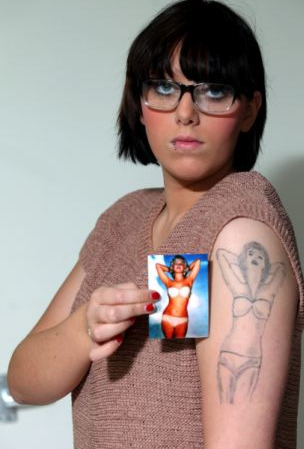