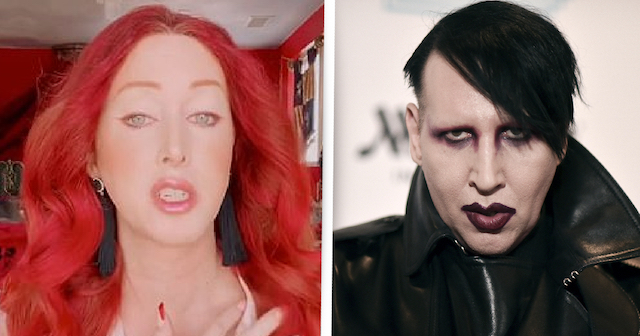 Like I predicted earlier, I can see more and more stories coming out about Marilyn Manson’s awful behaviour over the next few days and the latest one involves him holding a gun to a woman’s head and pulling the trigger during a transphobic incident. It wasn’t loaded, but that’s still pretty screwed up and wait until you read the rest of it.

The claims come courtesy of trans fashion stylist Love Bailey, after she first brought them up back in 2017 but nobody paid any attention or listened to her. She reiterated them in a video on her Instagram account yesterday though which you can see and read below, courtesy of The Daily Beast:

Encouraged by the other women coming forward, visual filmmaker Love Bailey told The Daily Beast how she visited Warner’s home to style a photoshoot with him and a Hollywood actress in 2011. Love Bailey also posted about this incident on Instagram and on Facebook in 2017 and has told friends throughout the years about the encounter.

Arriving at his home, Bailey was told Warner and the actress were “finishing up” in a separate room. When she was allowed to go inside to dress the actress, she claimed that the actress was in a disoriented state and stumbling around the room, leading Bailey to believe she had been drugged. “I had to crawl over stained sheets to get to her and as I did so he put a big Glock to my forehead,” Love Bailey said.

“I remember thinking, oh my god, am I going to die? I felt powerless, I felt stunned and I was shocked. I was in this state where I was asking myself, isn’t he too famous to kill me? I remember all these thoughts flashing through my head, and here I was, this young 20-year-old stylist just trying to get the job done and I was met with a Glock.”

As Manson pulled the trigger, he let out a laugh and said, “I don’t like f—-ts,” Love Bailey said. She believes it was a way for Warner to “scare me into submission, so I wouldn’t talk,” explained Bailey, who is trans.

Love Bailey said, in a blur, she quickly grabbed her things and left. “I was just afraid for my life at that point,” she said. “I didn’t say anything after that because the fashion industry is so small. If you say something, then the photographer will blacklist you and you lose your career.”

I don’t suppose that anything should surprise us about Manson now should it? I make this the eighth woman that has come out with their story in the past couple of days and I imagine that there will be many more like I said at the start of this article. California State Senator Susan Rubio is demanding that Manson be investigated, so hopefully something will end up happening to him – although his record label and booking agent have already dropped him so it seems like it’s already going on.

For more of the same, check out everything that’s been said about Marilyn Manson this week. Be warned though, it’s a lot.